Google’s share price has been almost twice that of Apple’s for quite some time now, but Apple was still the most valuable technology company in the world with the highest market cap, and that is still true, with Apple being valued at $378 billion vs Google’s $286 billion.

Now, according to the Wall Street Journal, Google has claim its place on top of Apple in terms of company value, at least in one measure. One where Rolfe Winkler from the WSJ says that net cash does not represent the true value of a company.

This measure, not as widely watched, basically strips companies from their bank accounts and their vast cash reserves ($145 billion for Apple and $45 billion for Google) and looks instead at their pure enterprise value. Here’s where Google has surpassed Apple with $241 billion vs the $233 billion value from Apple. That’s an $8 billion difference between the companies in favor of Google, which is not that much if you look at each company’s numbers but still enough to put Google in front.

This measurement reflects the true value of each company’s operations. 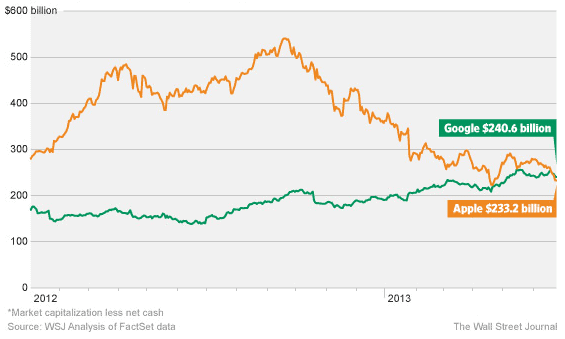 It’s worth noting that the two companies have based their business in two very different aspects of the market. On one hand, Apple made most of its money by selling iPhones, iPads and Macs – producing for very little, and selling at high costs, while on the other hand, Google’s business is predominantly based on ads and services. Both sides have pros and cons, but the difference here might be that Google’s way has allowed the company to make money out of every service they offer on every platform, not only the web and Android, but also every iPhone and iPad sold by Apple. Apple’s business gains nothing from Google, and even loses some when people switch platforms just for the Google services which we all know are way better in Android than in iOS.

Both companies make money by selling apps, books, movies and more. It’s the classic iTunes vs Play Store battle, which Apple has been winning for a long time, but Google’s Play Store is gaining ground, not only in the kind of services they offer (Google Music is still new and available in just a handful of countries) but also in the amount of apps installed and how much money users spend on it.

I’m sure Apple isn’t very happy about this, having it’s biggest rival claim top spot, even if it’s just in one measure. And as for the market cap measure, Google is getting closer every day. We’ll see if Apple can keep it’s place, or if Google will soon claim that one too.