Skip to content
Trusted By Millions
Independent, Expert Android News You Can Trust, Since 2010
Publishing More Android Than Anyone Else
0
Today
35
This Week
488
This Month
5630
This Year
115634
All Time

Gmail for Android was just updated to version 4.5.2, and the biggest change is that it’s now much easier to delete messages. That’s right, Google has made the delete function the default setting when you long press on an item or message. If you remember correctly, the last update changed that setting to the archive function. I’m happy it’s back to normal now, because I hate archiving messages by accident that I really want to delete.

Of course, there are some other changes that have come with the new update, most of which have been highlighted in a Google+ post for the official Android account. The list of changes includes the following:

To clarify, sender images are the contact images displayed in the ‘from’ field of emails. You can now select multiple emails just by tapping on the images themselves. It’s much easier and a lot more convenient. This feature has actually been around for a little while, but for some reason Google is just now pointing it out. Maybe they improved support for it? 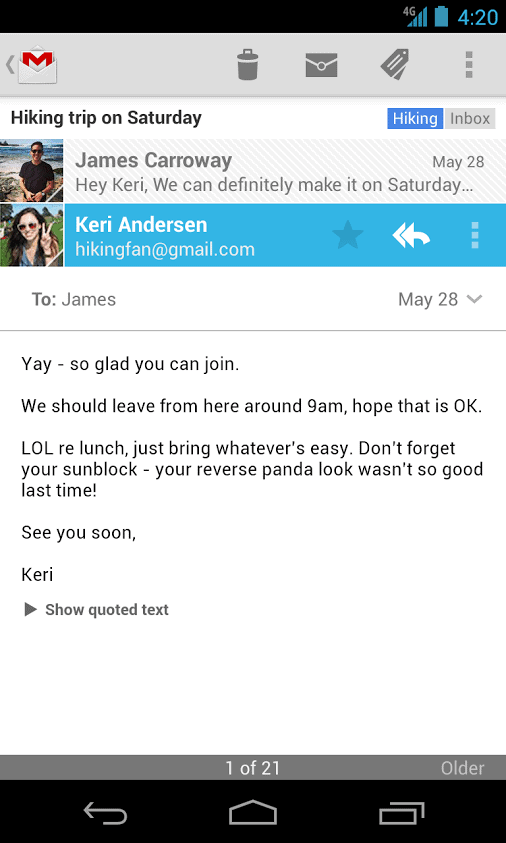 To update you’ll need a device running Android 4.0 or higher, with the stock Gmail app installed (obviously). As always, Google encourages you to send feedback to help better design apps specifically for you. If you would like to do so, you can visit “Settings > Send Feedback” from within the Gmail app.

The update is just now rolling out to all of my devices as I’m writing this up so I’m sure many of you will see it soon, as well. Have you tried out the new version of Gmail yet? Are you glad the delete function is back? I know I sure am, as I definitely missed it.

Gmail for Android just keeps getting better and better, although I would love to see some kind of scheduled messaging feature offered through the stock app. I know, I know Boomerang offers that feature exactly, but I would much rather use the official Gmail app.