Well, this is certainly a surprise. Not that Android 4.3 is in fact called Jelly Bean – we could have put good money on such – but more so the fact that it’s already available to download, install and be happy with. There’s a caveat here however, this is only available for Galaxy S4 devices and it’s only available for the GT-I9505 version so it looks like this is only going to be much good for those of you in Europe.

SamMobile have somehow managed to get their hands on the Galaxy S4 Google Edition Android 4.3 ROM and then they just went ahead and ported it to their own Galaxy S4, which was a “regular” Samsung model. As with most things like this, it’s not for the faint of heart and while the word on the street is that this is a fully-functioning build of Android 4.3, there’s no telling what bugs lie in waiting under the hood.

Without further a do, here’s how to get Android 4.3 on your Galaxy S4: 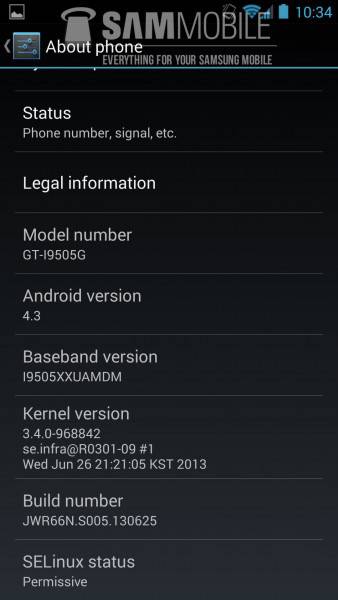 Predictably, there doesn’t seem to be anything too different in Android 4.3 than 4.2, which is exactly what we were expecting but, so far everyone that’s been through the ROM has found very little to write home about. There’s a chance that this is just a version thing that Google are playing around with, and that the update is actually coming later on. The screenshots that SamMobile have ripped out of the ROM don’t look like much, although as more talented folks get their hands on this, we may start to see some more changes emerging.

Let us know if you’ve tried this new ROM out, and if there are any difference that you can see!