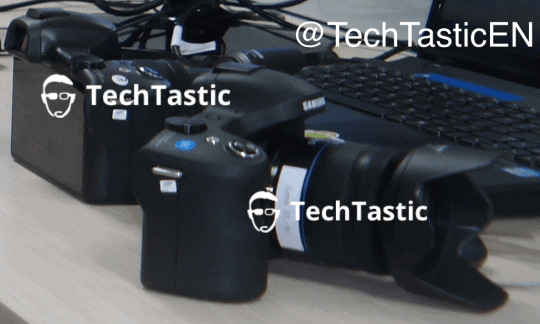 Samsung and Cameras have been pretty popular as of late. There's the Galaxy S4 Zoom that was announced this week, then the  confirmation of the Galaxy Camera 2 being announced next week in London. Now we are seeing a leak of a Samsung camera that looks a lot more like a DSLR that is said to run Android 4.2.2.

The folks at TechTastic have come across the camera which you see above. It's said to be sporting 20.9 megapixels. But as most photographers will tell you, it's not all about the megapixels. The model number is GN instead of GC, which hints at this being the Galaxy Camera NX, and being part of Samsung's NX line of camera's. Previously the codenames were EK-GC100, with the GC meaning Galaxy Camera. Now we  are seeing that the codename is EK-GN120, meaning Galaxy NX.

You'll also notice that the camera has changeable lens. There's also talk about this being a whole line of camera's from Samsung. What we are hearing is that Samsung will continue their Galaxy Camera, and probably release a new one this year, and next week we might be seeing this Galaxy NX Camera that is sporting the 20.9 megapixel shooter. But remember this is just a leak and should be treated like one. So take all of this with a grain of salt.

Who wouldn't want a full-sized DSLR camera from Samsung with a 20.9 megapixel sensor and running Android 4.2.2? Oh, did I forget the changeable lens? The original Galaxy Camera was a good first attempt, but I think the Galaxy NX Camera is going to be a really nice one. The only problem will be the pricing. I just hope they can keep the pricing rather low, say around  $700-800? Seeing as the Nikon D3100 is still around $600 and it's over a year old now.

How many of you would love a full DSLR camera running on Android? Let us know in the comments below.