Skip to content
Trusted By Millions
Independent, Expert Android News You Can Trust, Since 2010
Publishing More Android Than Anyone Else
5
Today
45
This Week
515
This Month
6491
This Year
124019
All Time 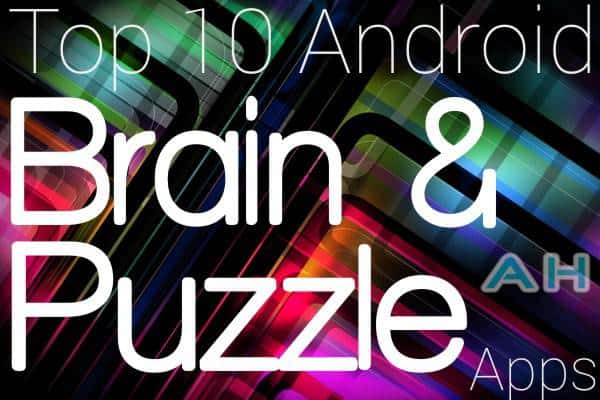 One thing that’s great about smartphones is that we no longer get bored while doing certain things. For example, something like waiting in a doctor’s office use to be a dreadful task, because all you had to do while waiting was read some out of date magazines or watch the Weather Channel. With smartphones and tablets, however, you always have a plethora of things to do right in your pocket. Obviously, gaming has become an incredibly popular thing to do on mobile devices, especially as smartphones get bigger and bigger. Smartphones have also made different genres of games popular again. My personal favorite genres for games are brain and puzzle. These are almost always casual games that you can pick up and play at your leisure. So, why don’t you join me as I count down the top 10 brain and puzzle games for Android!

X Construction is a puzzle game in which your main goal is to build a bridge with the given amount of materials so a train can cross over it without falling through. It has 27 levels to progress through, though there is also a free build mode in which you can build any kind of monstrous bridge you want. The full app costs $1.49 from the Play Store, although a lite version is also available for free, but it does not have all the features.

Some of the most classic time wasters ever are word searches. The concept is simple and you simply search for words in a jumbled mess of letters. Word Search for Android is about as simple as could be. You are given a grid of letters, which varies in size depending on the size of your device, and your task is to find all of the hidden words. It has a very clean design and all the words that you find are automatically highlighted in different colors, making it easy to keep track of your progress. Word Search is free on the Google Play store and also has a design for tablets.

100 Crypts is what’s called a “room escape” puzzle. The concept is pretty simple, being that you have to solve a puzzle in order to unlock the door in the room you are locked in. There are all sorts of ways to unlock, including Drag, Shake, Touch the floor, Swipe, Tap, Tilt, Push Buttons and more. It has absolutely gorgeous graphics and sound effects and is possibly one of the most addicting games I’ve ever played. Once you unlock the door, you move on to the next level. Best of all, it is totally free in the Play Store.

The concept behind Flow Free is pretty simple. Your main goal with the game is to connect matching colors with pipe to create a “flow.” When you pair all colors and cover the entire board, you have finished that puzzle, but, don’t worry, as there are more 200 levels. There are both free play and time trial modes, though the latter is far more stressful and challenging than the former. Flow Free is, you guessed it, free from the Google Play Store.

Slice It is a game focused on geometry, but don’t worry, it’s much better than any geometry class you’ve every had to suffer through in school. Essentially, all you have to do is slice shapes into fragments that are of equal size. While at first this may be easy, it gets incredibly hard the further you progress through the game. There are more than 200 levels to complete, and man can it make your brain hurt. Slice It is also free on the Play Store.

This is one of the most classic smartphone time wasters to ever be invented. Essentially, Words with Friends is identical to Scrabble. You are given seven letters and you must place them on the board to spell a word. Words With Friends is primarily meant to be played against real life opponents. You can play up to 20 games simultaneously and chat with your friends as you are playing. Push notifications also alert you when it is your turn. Words With Friends is free on the Play Store.

Unblock Me is one of the most popular puzzle games of all time, and is very addicting. Your objective is simple. You need to move the red block out of the board. To do this, you have to slide the other blocks out of the way. There are four different difficulty settings, from Beginner to Expert, as well as 4,200 levels of puzzles. There are two modes in which to play, challenge is much like Angry Birds, as you are awarded between 1 and three stars depending on hope well you complete the puzzle. Unblock Me is free on the Play Store.

World of Goo is a game in which your goal is to essentially make large structures out of balls of goo, doing this, you are expected to make a pathway that the Goo Balls can exit through. There a different kinds of Goo Balls and you have to use a combination of them to build the structure that will let you move on to the next level. It’s hard to explain, but once you get going, it’s really hard to stop. World of Goo costs $.99 on the Play Store.

Apparatus is one of my favorite games of all time on smartphones. The objection is to build simple mechanical structures to make a path for one or several marbles to the goal. There are all kinds of structures you can use, including batteries, motors, space rockets, teeter totters, and much more. It gets really hard, but if you need to waste time, then Apparatus is probably your best choice. It’s $2.49 on the Play Store, though there is a demo version available, which we recommend trying to ensure that your device is compatible with the game.