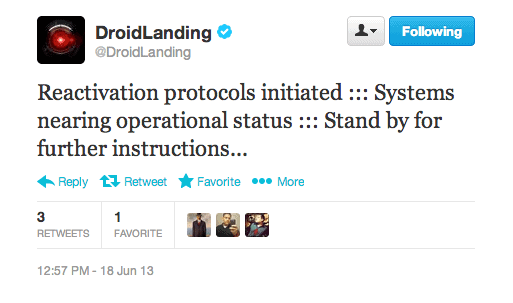 Today the popular @DroidLanding Twitter account got reactivated. Which is the official account behind the DROID-related scavenger hunts and phone teases over the years for Verizon. It sent out its first tweet in November of 2011. So what could this possibly mean? Perhaps a new Droid is coming soon?  Well we have no idea at this time but we are told to "Stand by for further instructions". We know that there is a Samsung device heading to Verizon soon, although we expect it to be the Galaxy S4 Mini. Then there's the HTC One, which we had hoped would remain the HTC One. Especially since Verizon said the HTC One is coming and not naming it something else.

This could be a contest or a phone launch, or possibly both. Who doesn't love a contest for a brand new phone. Speaking of contests, we just kicked off our contest for a Verizon Galaxy S4 yesterday, so you'll want to hit that up.

The last DROID phone that launched was the HTC DROID DNA last fall from Verizon and HTC of course. Ever since then the future of the DROID line has been in question. Especially since Motorola hasn't really released any phones in nearly a year and they are the main OEM that throws out DROID devices for Verizon. I guess only time will tell. But on another note, Motorola did say that they are updating all their product lines this summer. And we have seen an XFON go through the FCC for Verizon already.

What do you think is coming to Verizon soon? Let us know your thoughts in the comments down below.