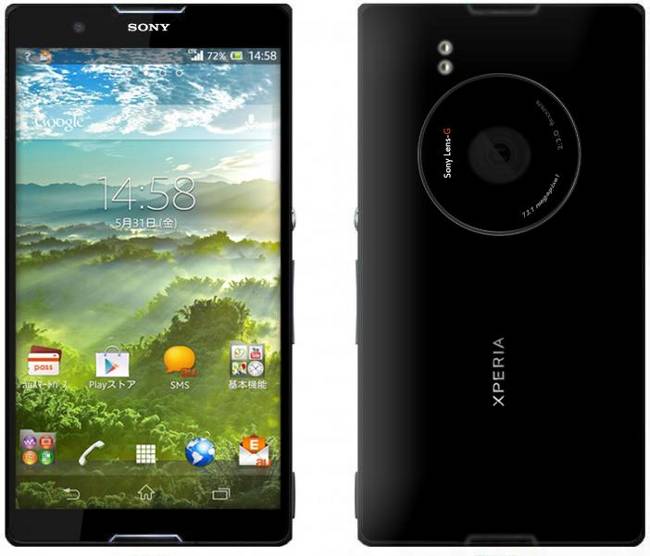 A story broke out today among several news sites claiming to have an official render of the highly rumored Sony i1 Honami. The i1 Honami is generating a significant amount of buzz because it could end up sporting the most impressive specifications we have ever seen on a smartphone. It is rumored to have a 5 inch Full HD display with X-Reality and a S800+ Adreno 330 processor. While those sound great, its biggest claim to fame is the supposed 20/13MP camera sporting Sony's popular Cybershot brand. If this proves to true, then the camera could in fact be the most impressive camera ever manufactured on a smartphone.

The image above is supposedly an official render of the device. However, it is now believed to be a fake. The image originated from Italian news site WebTrek, but was later debunked by the folks over at PocketNow. There are several obvious factors that point to this image's illegitimacy.

If you look closely, there are several aspects of the images that make it rather obvious that it was an amatuer mock-up. For starters, the high-resolution photo (pictured above) reveals that different areas of the image are actually at a lower resolution than others, making it inconsistent overall. In addition, simple elements like the icons, camera lens, and logo are not even centered properly. On top of that, the text around the camera lense has an incredibly odd curve to it, clearly not matching the natural circle curve of the lens. If all of that isn't enough, looking at the corners of the device show that it wasn't even cropped correctly as they are jagged and not smooth like they should be.

While we are fairly certain the the phone in fact exists, it seems the only legitimate visual evidence we have is the blurry shot of the device that leaked out a week ago. Other than that, we aren't even sure of the device's official specifications or release date. However, it does in fact make sense that Sony would try and combine its popular CyberShot line of cameras with their solid mobile phone business. While the phone is rumored for a fall release, hopefully we won't have to wait much longer for some concrete details.