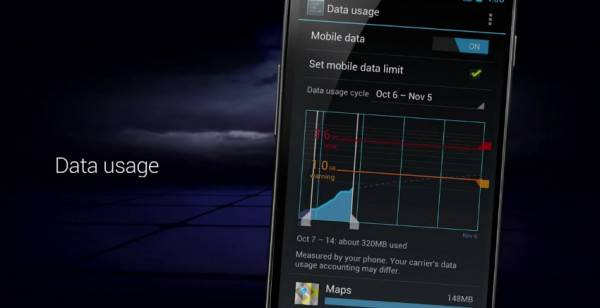 Those of you hoping that unlimited data will come back, you'll want to dream on. There's some recent data published from the mobile phone industry, there are three major shifts in the American cellular landscape. It's no surprise, but we are spending record amounts on mobile data, carriers are making barely any money off new subscribers, and usage of internet-based messaging systems going through the roof.

So why the push to data services? Well that's where the money is. AT&T was the first carrier in the US to get rid of unlimited data and go to tiered data and then T-Mobile and Verizon followed suit. While Sprint kept unlimited data, and T-Mobile brought unlimited data back just last year. Since most of us are not home often and are always on our phones or tablets, mobile data usage is going through the roof. Just looking at my data usage on my Nexus 4, Hangouts has used about 150mb in 2 weeks, and Facebook Messenger has used 100mb in about 2 weeks.

What about data only plans? Well carriers can still charge more to give you minutes and texts, even though many of us don't use them. Honestly, I barely call anyone anymore. I barely text anymore either, mostly because of apps like WhatsApp, Kik, Twitter, Snapchat, Hangouts, Facebook Messenger, etc.

The collective US mobile data market reached $21 billion in revenue in the first quarter alone. Sharma is estimating that by the end of this year we will reach $90 billion. This means that on average the 160 million Americans who have smartphones are spending $560 on data per year. That's quite a bit. In comparison, that's a 14% change compared to 2012.

One trend illustrated by Sharma is strikingly ominous: the revenue American operators derive from new subscribers has dropped to just two percent of their overall sales. In the year 2000, it was still over 20 percent. This means that there is no sales growth to be had from chasing new customers. All the upside is now in squeezing more money from existing subscribers. The new family plans pushed so hard by leading carriers effectively lock in entire households for good. Once you have two to four people on one family plan, switching carriers becomes prohibitively cumbersome.

So this leads us to ask you, what do you use your smartphone for? How have your habits changed over, say, the last 5 years? Let us know in the comments down below.