According to a lot of people, the Galaxy S3 was really the phone that turned the tables for Samsung, and the Android platform too for that matter. The company was able to release the device across all major United States carriers at the same time, with the same design, with the same specs, and with the same lineup of accessories. The device sold millions of units, and is still one of the best phones you can buy today, especially for the lower prices that it is going for now that the Galaxy S4 is out, as well as the HTC One. Because it is in the hands of so many people, though, no bug goes unnoticed.

According to researchers at the University of Massachusetts Amherst, there is a pretty big bug in the Samsung browser on the Galaxy S3. The research shows that the browser, for some reason, can just go wild and download excessive data while surfing the web. In the report, it is stated that Wikipedia's Internet Explorer page takes downloads just 600KB when viewed. On the Galaxy S3, however, 2.1MB of data are downloaded. Given the world of bandwidth data caps and steep overage fees that we line in, this is not something that should be happening. This means that just a little web browsing could make you exceed your monthly data limit. 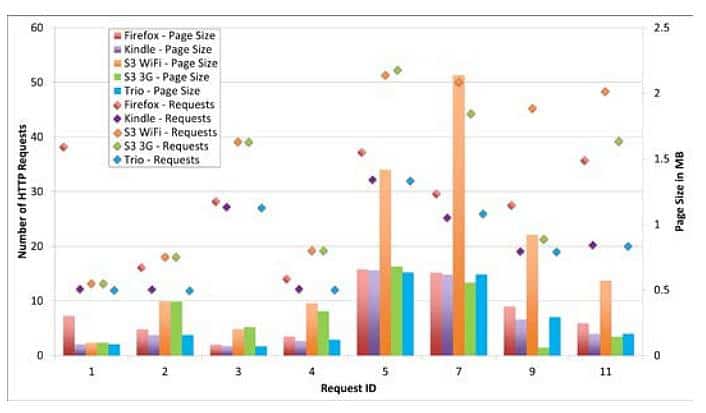 The report goes on to claim that the extra data being downloaded by the Galaxy S3's browser is also negatively affecting performance. The graph above shows that the Galaxy S3 makes a lot more HTTP requests than other browsers, which in turn leads to slower page loads and breakage when some of those requests time out.

It is believed that the HTML image attribute called srcset is the cause of the data dumps the Galaxy S3 is doing. The srcset is still a draft spec, but it is used by designers to deliver resized images to different screen sizes. It should be able to figure what needs to be downloaded and what doesn't, but it looks like that is not the case with the Galaxy S3.

Of course, all of this could be fixed by using Chrome or something of the like as opposed to the stock Samsung browser.

Do you notice abnormal data usage with your Galaxy S3? Tell us in the comments!

Trusted By Millions
Independent, Expert Android News You Can Trust, Since 2010
Publishing More Android Than Anyone Else
29
Today
65
This Week
580
This Month.
8027
This Year
109499
All Time