ASUS has had quite the busy Computex conference this week, but last night it showed that it still had one more surprise in store for everyone, even if it looks like the company is running out of ways to cleverly introduce a product.

During a Qualcomm keynote on Tuesday night, ASUS CEO Jerry Shen took the opportunity to tease a mysterious Android, which he says will be released in the third quarter of this year. The interesting part is he pulled the tablet out of his hat. While specs are unclear, given the fact that it was shown off during a Qualcomm event, it's pretty safe to say that the device will be powered by a Qualcomm processor. The company also confirmed that it has LTE on board, as well.

While Shen didn't confirm the name of the device at the event, the company later told Engadget that the device is called the MeMo Pad FHD 10 LTE. Yep, that's a really long and confusing name.

It looks like this could be essentially the MeMo Pad FHD 10 with LTE and without an Intel Atom processor. The MeMo Pad FHD features a 10-inch 1920 x 1200 display, a 9.5mm thick design, Android 4.2 Jelly Bean, and all your normal connectivity options. We're willing to bet that this device is nearly identical, especially given the name. 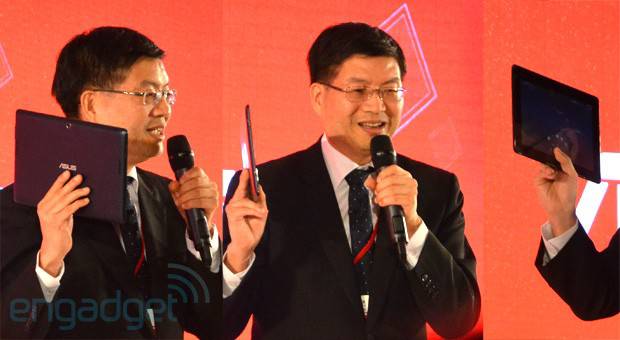 "In Q3 of this year, we will raise the bar of mobile devices by launching an incredible LTE tablet, which will have Qualcomm Snapdragon, full HD display and ASUS SonicMaster to bring our consumers the most superior and seamless mobile experience. I will save the rest for our launch event in the fall."

It sounds like ASUS is touting this device as tis flagship tablet for 2013, although it won't launch until later this fall. I'd say it is also a pretty safe assumption to say that this device will feature the same keyboard docking feature as the Transformer tablets.

ASUS has arguably been the most successful Android tablet manufacturer, as its Transformer series proved to be pretty popular thanks to the keyboard dock.

What do you think of the products ASUS has announced at Computex? Let us know down in the comments!

Trusted By Millions
Independent, Expert Android News You Can Trust, Since 2010
Publishing More Android Than Anyone Else
29
Today
142
This Week
89
This Month.
8267
This Year
109739
All Time