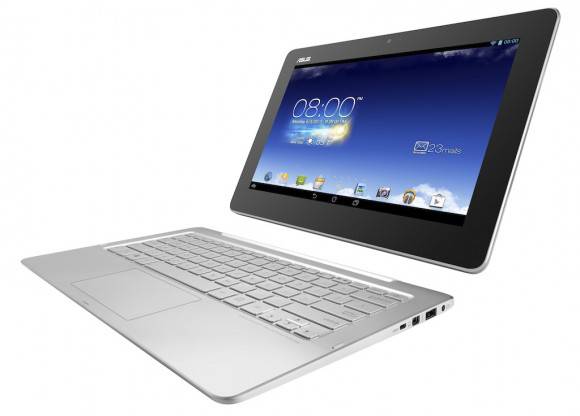 The device will basically be a tablet on top, with the bottom half of a laptop (with its own battery, processor and storage) attached to it. The display will be 11.6", with a 1080p resolution, which doesn't seem as high as it should be for 2013, especially when their new Transformer Pad Infinity comes with a 2560×1600 resolution in a smaller screen, and most likely costs much less, too.

This is actually probably the biggest flaw of this device – its price. They haven't announced anything yet, but just like those expensive dual-screen laptops we've seen before, which turned out to be prohibitively expensive, this machine with two processors, two batteries and two drives should be significantly more expensive than a "regular" laptop, and even more expensive than even a "high-end" Android tablet/hybrid.

And if you want great performance for the tablet part, the Atom Z2580 won't offer much of that, either, as it's more in range to last year's chips, than a competitor to any of the 2013 mobile chips. So it doesn't offer much value on top of a regular Haswell laptop, and the extra price will probably chase many people away.

I think Asus is right to experiment with all sorts of devices, but at the same time I feel that some of them should never leave their research lab. It's much more expensive for them to actually try to sell a device that has little chance of succeeding in the market than to simply invest some R&D money in it.

Asus should be continuing with devices such as the Memo Pad HD7, and the next-generation Nexus 7, which I assume they will be making again, and try to gain as much market share as possible in the tablet market, before the market starts to mature, and before the players are decided and entrenched. Samsung keeps missing the boat in the tablet market, too, although they still manage to sell them due to their huge marketing budgets, but there's a real opening for Asus to become the #1 Android tablet maker here, and I hope they'll take advantage of it.