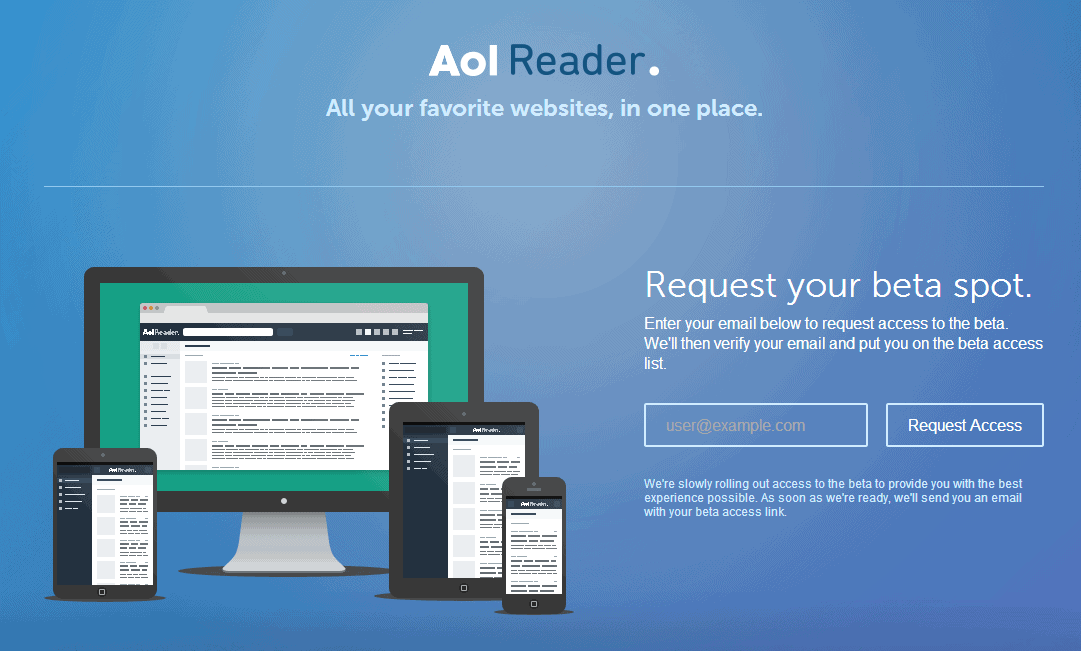 With Google Reader's funeral coming in about another week. Many companies are putting together Google Reader alternatives. Feedly has been a pretty popular one and they've gained a ton of readers. And that's an understatement. Now Digg is also working on a RSS Reader which hits beta this week as well. We just learned last week that AOL was working on an AOL Reader as well, which just went live for beta users.

AOL's new Reader can be accessed by anyone with an AOL, Twitter, Facebook or Google account. Right now you'll have to request beta access. Which I have done today, so hopefully we can get access pretty soon. It's pretty clear that AOL sees a market here that they want to tap into. But perhaps they should have put the beta out a month or so earlier? Google announced the end of Google Reader back in March, so they've had plenty of time. AOL probably saw the growth of  Feedly and decided to jump in.

Looking at the screenshots here, AOL Reader looks a lot like Google Reader, which is going to be really good for those looking to stick with the same interface. As we learned with Windows 8, many people don't like change.

With AOL Reader you can import your feeds from Google Reader, Feedly or another RSS reader by uploading the XML file. It then populates your Reader fairly quickly. It's also missing an option to mark everything as read, which is a must have feature for me.

It's nice to see another RSS reader coming out for all of us that still use RSS feeds to get our daily news. We're still looking forward to see what Digg's reader looks like and how it works. They are bringing an iOS and Android app, but no word on apps for AOL's Reader.