Hey there lovers of Sony smartphones, boy do we have some great news for you tonight, and I will get straight to it. The Sony Xperia ZL that you all know and love and is our United States sit-in for the Sony flagship of 2013, the Xperia Z, has been given a price cut in the U.S. Sony Store! The device can now be had for $630 off-contract through Sony. For those of you that have been waiting for the Xperia Z to hit U.S. shores, this might make his little brother just a bit more enticing. 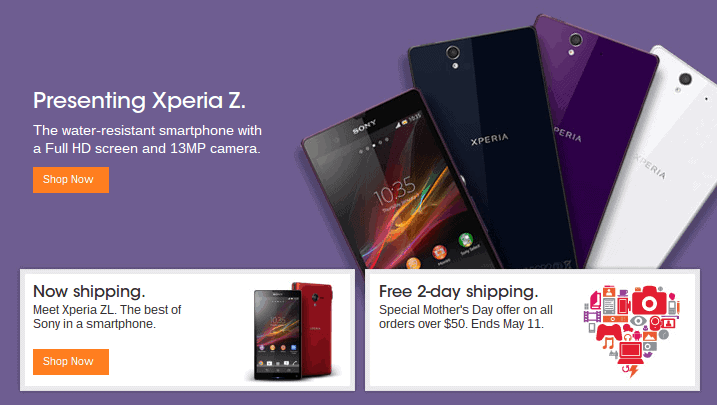 Ok, Ok, there is bigger news. The long awaited Xperia Z is now available in the United States. The water-resistant, 5-incher has up to this point only been available through import, but now you can pick it up unlocked through Sony at the same price as the Xperia ZL, $630. With a 1.5 Ghz Snapdragon processor, this one may not blow away the competition, but it was the star of CES back in January and is an exceptionally great looking device.

A major qualm about this device thus far, and one of the only problems that I personally have heard anyone complain about has been the viewing angles of the 1920 x 1080p display. The device tends to wash-out severely when not being looked at from directly affront the device. Of course to many this will be no problem at all and you'll be none the wiser. After all, most of the time when we look at our phones we are holding them in front of our faces.

The Xperia Z is now available in all three colors: Black, White, and a beautiful Purple, and is clad in glass all around. It is definitely a great looking device and one that Sony fans will be proud to own. The downfall of buying the Xperia Z over the ZL is that with the Z, there is no LTE. With the Xperia Z, Sony lovers will be stuck with HSPA+ much like those of us with the Nexus 4. The ZL does offer LTE, but you already know that and have already written the little brother off, if you're still waiting for this move from Sony.

What are you waiting for? Get on over to the Sony Store now via our source link, and get that order in your basket Sony fanboys. After that, come back here and leave us a comment below about your experience. You can also join in on the Xperia Z release conversation over at the Android Headlines Google+ page. Either way let us know what you think. Congratulations U.S. Sony fanboys, you've had quite the wait.

Trusted By Millions
Independent, Expert Android News You Can Trust, Since 2010
Publishing More Android Than Anyone Else
28
Today
155
This Week
660
This Month.
8102
This Year
109574
All Time