Even though the device has been available from other carriers for nearly a month now, Verizon is now finally joining the Samsung Galaxy S4 party. Earlier this month, a Verizon PR person took to Twitter to announce that the launch date of the carrier’s variant had been moved up May 23rd from May 30th, and wait, what is today? Yep, May 23rd.

Right on schedule as the carrier promised, Verizon’s Galaxy S4 variant is now available for purchase online and in select Verizon stores. The 16GB model will run you $199.99 after a $50 mail-in rebate and with a new two-year contract. Should you be feeling rich, then an extra $50 will get you the official accessory bundle for the device, which includes a silicone cover in the same color of your device, a screen protector and a car charger. We’d advise against that, though, as all of those can be purchased much cheaper from a third-party, or you may want to spring for one of Samsung’s official covers/cases, such as the S View cover. The S View Cover allows you to see a portion of your devices display with the time, date, and notifications even when the cover is closed. 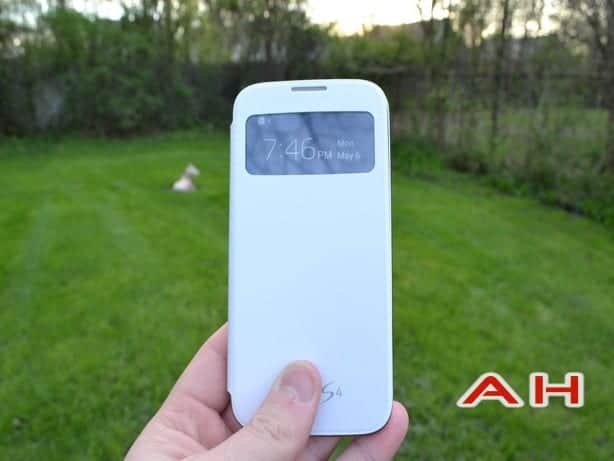 If you do not want to purchase your Galaxy S4 on a contract, then you can buy it with month-to-month service for $649.99, the same as what Google is selling the AOSP Galaxy S4 model for on the Play Store. Currently the device is available in Black Mist and White Frost color versions, but it’s possible that Verizon will launch the new color variants sometime down the line.
However, if you want to save some money, then Amazon Wireless is already selling the Verizon Galaxy S4 for $179.99 with a new two-year contract, and that is sans mail-in rebate.
In our review of the Galaxy S4, we praised the device for having things such as expandable storage and a removable battery, but did note that the build quality is suspect and that there is noticeable lag when using the device sometimes, especially when you fill it up with apps.
Do you plan on purchasing the Verizon Galaxy S4? Let us know down in the comments!
Buy: Verizon, Amazon Wireless (White), Amazon Wireless (Black)