This means that the rumors that we have heard about a Tegra 4 powered Chromebook being in the works could be very true. Jen-Hsun Huang called the Tegra 4 the "highest performing processor" currently, and eluded to the fact that many Android handsets will feature the chip this quarter with even more devices coming throughout the year.

"Outside of phones, where we see these new computing devices becoming like entry-level PCs, performance matters," Nvidia CEO – Jen-Hsun Huang

While there were no products released in conjunction with the Tegra 4 back in January when it was announced, Nvidia did announce the Project Shield gaming console that featured the chip. While the Tegra 4 has been marked as a high-performance chip that is expected to go into top-of-the-line mobile devices, we have yet to see how it will handle battery life. This is a key factor in the competition between the Tegra 4 and the latest from Qualcomm's Snapdragon line. The Snapdragon 800 chip is currently used in the latest flagship devices from both HTC and Samsung.

"With a powerful graphics engine and the latest ARM processor design, Tegra 4 will likely go into high-performance smartphones and tablets, Nvidia had to get Tegra 4 out quickly because of the "hyper-competitive" market for ARM-based chips," -Jack Gold, principal analyst at J. Gold Associates 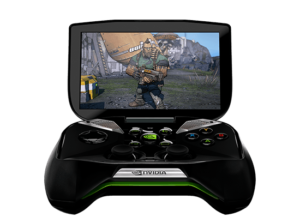 The Arm Cortex-A15 processor in the Tegra 4 replaces the Cortex-A9 of the Tegra 3 and has a clock speed of up to 1.9GHz. The SoC boasts an impressive 72 graphics cores making it a shoe in for high-end Android gaming handsets, tablets, or implementations like the Project Shield console. Nvidia has also announced an updated Cortex-A9 in the Tegra 4i with a software defined LTE radio. The Tegra 4i should be making its first appearances in devices in the second half of this year.

Are you guys excited about the Tegra 4 or its potential implementations? Join in on the Tegra 4 conversation over on the Android Headlines Google+ page or leave a comment below.