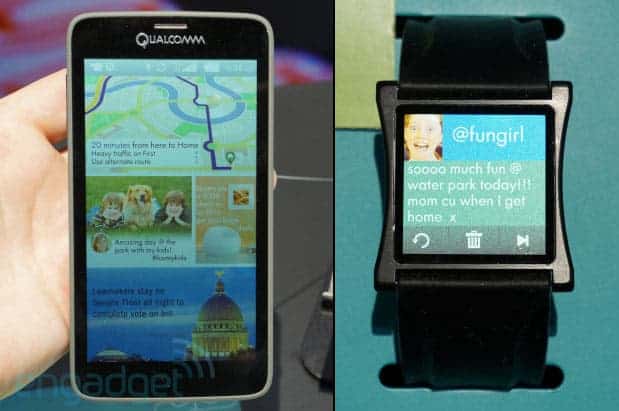 In addition to LG showing off their 5-inch OLED display at SID this week, Qualcomm is also demoing their 2560×1440 Mirasol display. It's a previously announced 1.5-inch panel embedded on the top of an "always-on" smartphone and on the face of a smartwatch. A rep did take care to emphasize that these are just mockups and are not in production yet. But the screen will show up in some third-party devices.

Qualcomm also showed off their next generation display which is a 5.1-inch display with a 2560×1440 resolution. For an eye-popping 557ppi, that's over 100ppi more than the HTC Droid DNA, HTC One and Samsung's Galaxy S4. When you look at the Mirasol display, the images deliver crisp images, which you'd expect with that many pixels. The reflective display kicks back a silvery tint and colors don't pop as they do on other handsets. This display does offer a huge plus, which is that it's 6 times power advantage over LCD and OLED displays. So basically you should be able to go days without having to charge your device.

The reps have also said that you shouldn't expect to see this display in your next device. Qualcomm still have a few more years in R&D phase before it'll be ready to hit the production line. You can check out Engadget's hands-on video down below. It looks pretty great, and I'm excited to see that type of display in a smartphone. That's almost the same resolution as the Chromebook Pixel and Nexus 10 which are beautiful devices.

How many of you are excited to see this type of display in your next-gen smartphone? 577 pixels per inch is definitely going to lead to some battery draw, so it'll be interesting to see how Qualcomm can keep the battery going for days, since it can't do that with current displays. But it's still in early development and I can't wait to see it on the market. What do you think about these displays from Qualcomm?