It is no secret that the modern era has come at a price for some of the poorest people on earth. Recent worker protests over horrible working conditions at Foxconn manufacturing facilities in China have received a lot of press but let’s be honest; most of us glanced at news stories about 20 hour workdays and low salaries and thought “that’s horrible” and then when back to what we were doing. I can only really speak for those of us here in the US, but it is tough to make big changes in our lives based on something that is so foreign and so far away.

I hope I don’t sound condescending or preachy. None of us have the moral high ground when it comes to this subject. We might avoid a few products that we know are the result of horrible treatment of other human beings, but who can actually avoid all of them? It is nearly impossible to distinguish between products made in safe working conditions and others that are made by quasi-slave labor.

There is another hidden cost to the smart phones we all love so much. Landfills are filling up with toxic metals because only 18% of mobile devices are recycled. This is an especially big problem when you consider that many of the rare-earth elements that make modern technology possible come from parts of the world that have exceedingly lax regulations when it comes to things like safety and wages. It seems to be a problem with no solution, and in many ways it probably is. 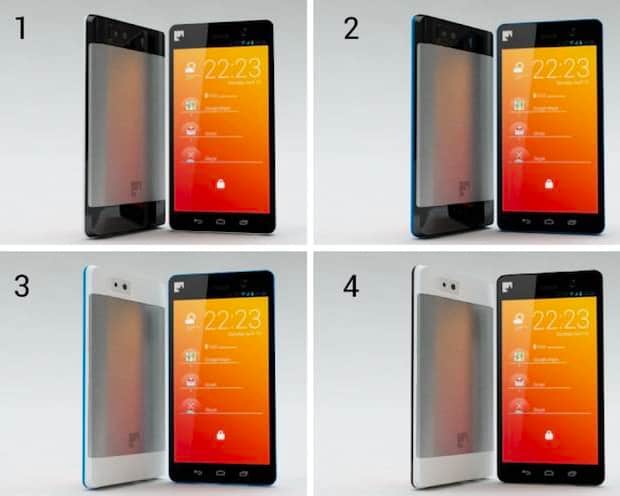 There is one product that hopes to help put a dent in this seemingly unsolvable conundrum. The Fairphone is the result of a startup looking to create a device that is humane and environmentally responsible through the entire manufacturing process. For now this device is just a dream. The people behind the Netherlands-based company will need at least 5000 people to preorder the Fairphone so that they can start production. Over 12000 potential customers have expressed an interest but that may not necessarily translate into preorders. The Fairphone will cost â‚¬325 (£250) if it goes on sale.

The exact specs are a mystery but customers would be able to purchase one of the four designs in the graphic above. We do know that the smartphone would launch with Android 4.2 and a 4.3 inch touchscreen. Assuming we see at least mid to high-end hardware is this a device you could see yourself investing in? Personally I’m not sure I have the moral fortitude to make this kind of move, but  a device like this could encourage mainstream manufacturers to improve conditions for workers around the world. That is the real value of a product like this, it is more likely to be a statement than a hugely successful smartphone and there is nothing wrong with that.