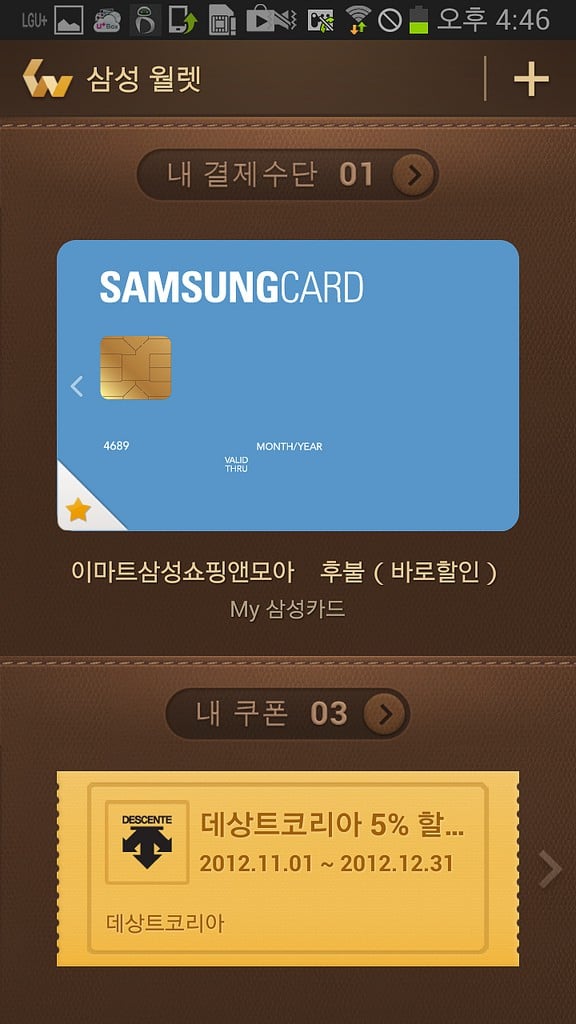 Today, Samsung released Samsung Wallet (why not call it S Wallet?) as a payment settlement application optimized for the mobile environment. Basically, it's Samsung's version of Google Wallet. So when it finally makes it to the US, I wonder how many carriers will block it? Starting on May 22nd, users will be able to safely and conveniently pay money online once their credit card it registered to their Samsung Wallet account.

Smartphone users will be able to simplify the process with OTP which is a one time password, certification after the credit card number and PIN are registered on the users account. As you can see in the image above, it looks pretty similar to the rest of Touchwiz. And even the logo in the upper-left hand corner kind of looks like the Google Wallet logo. So why did Samsung opt to make their own Wallet app? Who knows. But it would make plenty of sense if they can throw this app on their Windows Phone 8 phones and their upcoming Tizen phones. Then users could jump platforms and still use Samsung Wallet for mobile payments. Makes sense right?

Currently Samsung Wallet is only available in Korea, which is Samsung's homeland and they normally get new treats first from LG and Samsung. It should be coming to other parts of the world soon. We just don't know how soon yet. We also don't know if the ISIS-backing carriers (Verizon, T-Mobile and AT&T) are going to attempt to block Samsung Wallet from the Samsung devices they have on their store shelves.

How many of you are looking forward to using Samsung Wallet? Would you use it instead of Google Wallet? Let us know in the comments down below.