As is customary with Samsung’s previous Galaxy Series devices, the Galaxy S4 will soon be released in a Developer Edition. The Dev Edition Galaxy S4 will be available through Samsung, and works on AT&T and Verizon networks.

The Dev Edition comes with an unlocked bootloader right out of the box, allowing for custom software installs and much more. It’s no surprise that both AT&T and Verizon variants of the device are shipping with locked bootloaders. Hopefully, someone resourceful will crack the bootloader soon enough, but for now unless you purchase the Dev Edition from Samsung you’re out of luck.

The Dev Edition appeared on Samsung’s website, and both the AT&T and Verizon models are visible. Currently, they’re labeled with a vague “coming soon” release date, and there’s no mention about when exactly they will be available. It’s rather obvious that Samsung is going to charge a premium price for the unlocked handsets, but there’s no mention of that price either. We can only hope that Samsung won’t wrack the price up to a ridiculous amount, but that’s certainly a likely outcome. 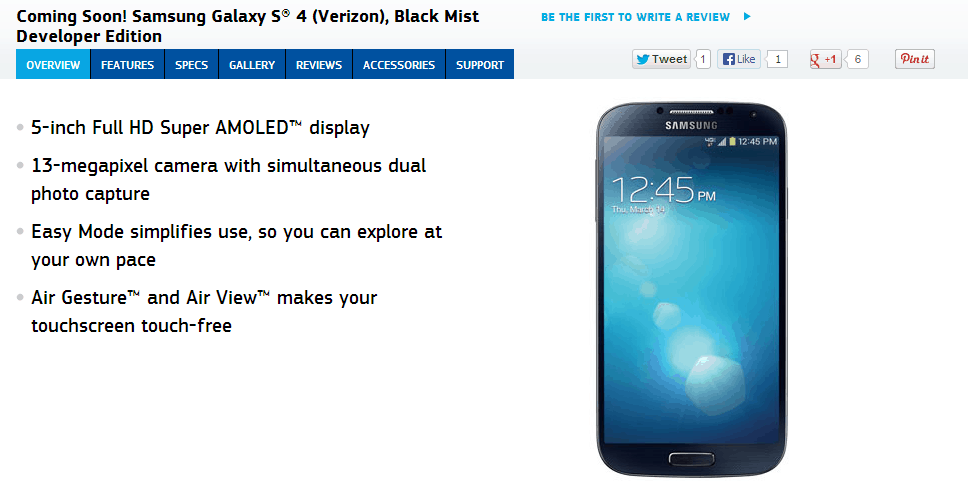 Interestingly enough, the Google Edition of the Galaxy S4 will soon be releasing for AT&T and T-Mobile. It goes without saying, a stock experience is always preferred by many Android lovers. That’s why the Dev Edition Verizon handset is so appealing, that unlocked bootloader would at least allow consumers the chance to load custom software on the device. Since Verizon won’t be getting the Google Edition of the Galaxy S4, Android lovers would at least be able to find a suitable ROM replacement to run stock Android.

There’s no difference in terms of hardware, so if you pick up a Dev Edition handset you’re getting the same device albeit with an unlocked bootloader. To many, the price alone will likely be unappealing, but some would consider the unlocked bootloader worthy enough to pay extra for.

What do you think folks? Would you be willing to pay a premium price for a Galaxy S4 with an unlocked bootloader? Would you rather purchase the standard device and wait for the bootloader to be cracked? Do you even care about the bootloader, at all? Let us know in the comments below!