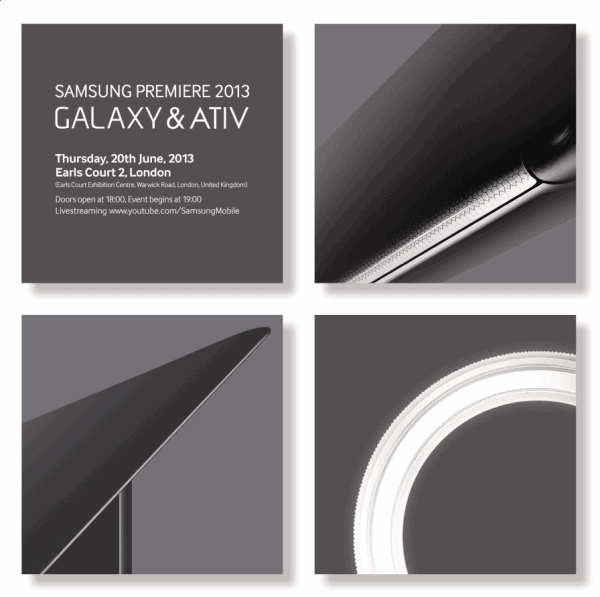 Leaks concerning upcoming devices like the Galaxy Zoom, Activ and Galaxy Tabs have been coming thick and fast, which usually means that a launch can't be too far behind. We've heard June is going to be the month that a number of things become clear on the Galaxy front and Samsung are now announcing that they're holding an event in London, come June 20th. Not just any event though, Samsung are billing this as a "Samsung Premiere" for both the Galaxy and the Ativ brands. If you're unfamiliar with the Ativ brand, it's Samsung's arm of Windows Phone and Windows 8 products.

What we're really interested in however, is what Samsung will have in store for us on the Android front. Well, recently we've seen the Galaxy Activ and Zoom leak out, with the former being snapped on camera a number of times now. There's a good chance that the Galaxy S4 Mini will be announced as well, the main attraction has been on sale for a while now and we doubt that Samsung will want to launch the Mini too far away from the Galaxy S4. A new line of Galaxy Tabs have been pegged for release in June as well, so this could be the event that Samsung focuses on tablets, both of the Android and Windows 8 kind.

Overall though, there are only four images to go on here, so there's not a lot we can draw from them but, knowing Samsung, we're sure that they'll have a couple of teasers coming our way before that June 20th date as it is. Hopefully, we see the Galaxy Tab line-up fully revealed and perhaps the Galaxy Activ will make an appearance as well.

We've got 3 weeks or so until then so, stay tuned and when June 20th comes round, be sure to keep it locked to Android Headlines as we bring you all the latest Android news to come from the event.