Earlier this week, The Next Web and Android Police got an anonymous tip about a new version of Gmail. The tip was showing off an alleged Gmail redesign that would automatically categorize all your emails and also separate them into different inboxes. What was interesting about the images is that they were very sloppily done. Which you can see all the issues done below, as pointed out by Android Police. 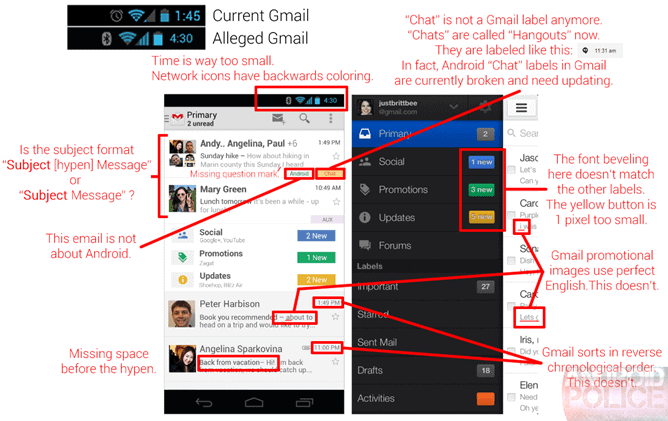 We are now seeing some confirmation from ryan_socio who's a member of The Verge forums and is quickly becoming a trusted leaker in the industry after being right about Babel/Hangouts before Google I/O and being right about last year's fall event. So he's a pretty solid source so far. 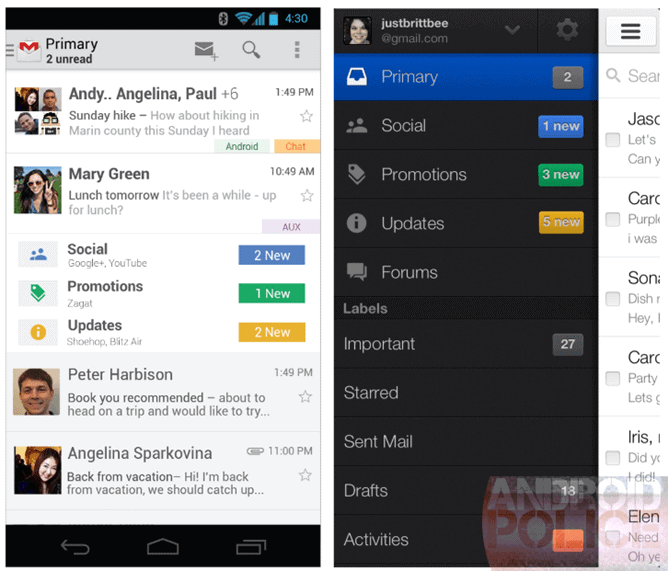 The images above are showing the new version of Gmail on Android, iOS and desktop. So it's not just an Android update to Gmail, but across all three platforms. The Android version is what we'll be focusing on, and it does have the slide-out navigation drawer and a top-only action bar. Which is just like what we saw at Google I/O earlier this month. Gmail also now sticks profile pictures (most likely from Google+) in front of every email and multiple labels are now readable.

The new automatic email categorization feature makes you think the "SmartLabels" lab feature is graduating into prime time. The SmartLabels automatically tagged incoming emails with "Forums", "Notifications", "Promotions", "Updates", and "Social Updates". As noted by Android Police. It's also worthy to note that these lable show up differently on each platform.

So when is this launching? Well, Android Police's tipster says this is a draft of an official Gmail Blog post which is set to go live Wednesday at 4pm GMT, which is 12-noon EDT, and 9am PDT. So it should be hitting the Play Store (and App Store, if you use an iOS device).

These are some pretty sloppy images, so I hope that these get changed before the official blog post goes live announcing the new update this week. But our much awaited Gmail update is almost upon us. Or so it seems. How many of you would love this new Gmail update?