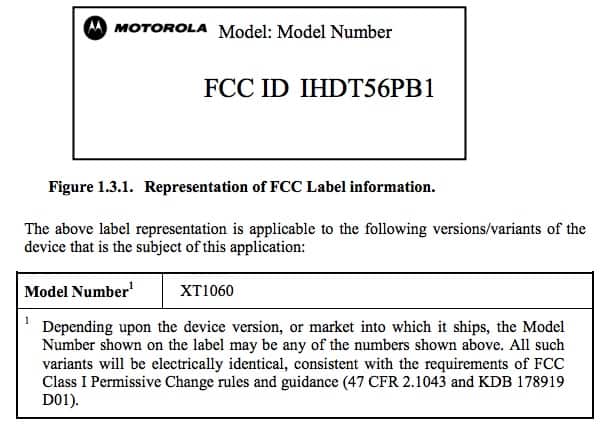 Okay, so Motorola has to be getting ready to announce something sooner or later. In the past few weeks we've seen the XT1058 for AT&T, the XT1056 for Sprint and now the XT1060 for Verizon pass through the FCC. All likely to be the X Phone or XFON as previously leaks have told us. We don't have a whole lot of confirmed specs. But we do know it's going to support Verizon's network of course, and have NFC, Bluetooth 4.0, and Wi-Fi 802.11 a/b/g/n.

What's interesting here is that it does support GSM bands. So we should be expecting it have Global roaming capabilities. It could even be left unlocked, as Verizon has done that with a few devices as of late. Including the Galaxy S4, which I've used my T-Mobile SIM card on and it works without any hackery.

But back to the  X Phone. I know you're tired of all the rumors. But it's starting to look like it's the real deal. As fake devices don't just pass through the FCC and to see 3 devices for 3 different carriers with very similar model numbers, that means there's something coming. It may not be the mega-high end device we've all been hoping for. But Motorola has something up their sleeves, and I for one cannot wait to see it.

So now we're just waiting on the T-Mobile variant to hit the FCC. As our rumors have told us the device will launch on all the major carriers, and that's the only one left. So hurry up T-Mobile and FCC so we can see what Motorola has in store for us.

How many of you are keeping your fingers crossed, still, for the Motorola X Phone? I know I'm definitely waiting on it and hoping it comes real soon. Let us know in the comments down below.