Over the last year or so, LG's fortunes have turned in the Android world. Early on, the company was not having very much success with Android powered devices, and when it released the G2x, it seemed like the company had hit rock bottom. The device had a number of hardware defects and led to overall disappointment from users. Late in 2012, however, everything seemed to click. LG released the Optimus G which received great reviews. Google then partnered with LG to release the Nexus 4, which despite some issues on Google's end, received good reviews, as well. However, we can't forget the low to mid-range devices that have also helped LG stay afloat. One of the best-selling lines of Android devices recently has been the L series.

The L series was originally announced in 2012 and is a series of low-end to mid-range devices that are stylish and affordable. That combination, as well as decent specs led to overall success for the series. So far this year, LG has unveiled the Optimus L3 II, L5 II, and L7 II, and basic math tells you that the logical next device is the LG Optimus L9 II, and that's what we have here. 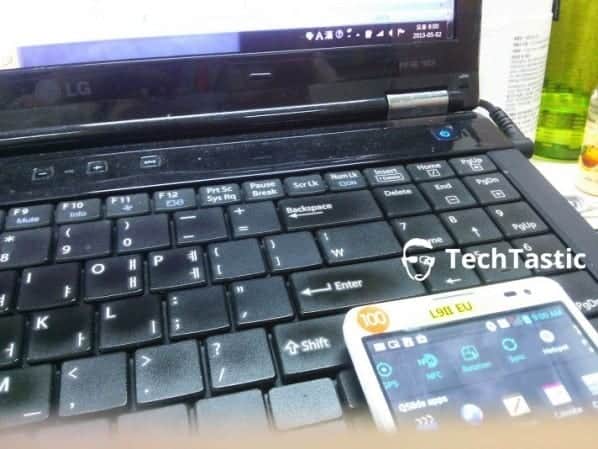 The original Optimus L9 was released late last year and looks as if a successor is already pretty far into the development process. Tech blog TechTastic has been sent the above image, which appears to be of the LG Optimus L9 II. There's not much we can tell from the image, as for some reason, only half of the device is visible. It's almost as if the laptop is the main focus of the image, not the L9 II. The source who obtained the image claims that the device is slated for a release sometime in June.

As far as specs go, we know quite a bit thanks to benchmark results. The Optimus L9 II should feature a 4.7-inch 720p HF IPS display, a 1.4GHz dual-core Snapdragon 400 processor, and 1GB of RAM. It's rocking Android 4.1.2 with LG's overlay on top, as well.

Do you think LG will be able to follow-up its successful 2012 lineup this year? Let us know down in the comments!