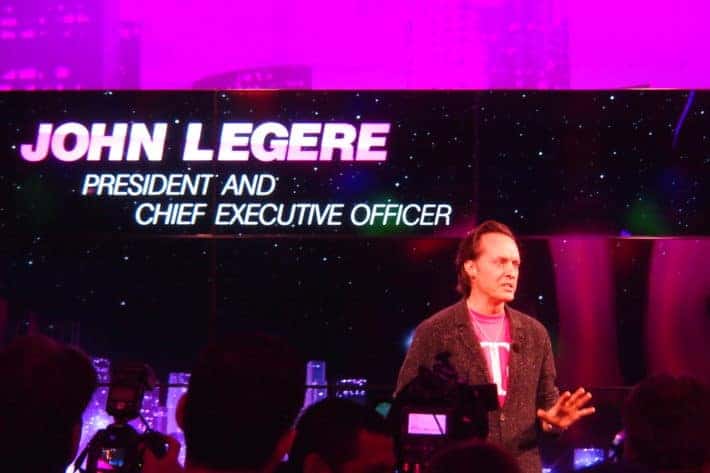 Since John Legere took over at T-Mobile late last year, we've gotten to know him a bit better. He's certainly not like any other CEO in the wireless industry. That's a good thing, and possibly a bad thing, depending on your stance. Legere is actually quite fun to listen to mostly because he's not afraid to talk trash about his competitors. Now we are learning that this is all part of a "carefully constructed strategy".

A profile of Mr. Legere over at The Wall Street Journal makes clear that Legere thinks that he needs to draw attention to himself if he's going to have any chance of drawing customers from T-Mobile's competitors like Verizon and AT&T. WSJ notes that after becoming the CEO of T-Mobile he "grew his hair out, traded his ties for T-shirts and has started sprinkling his public comments with profanity" to make himself stand out.

Legere has also brought along another key trait that he thinks will help turn around the magenta carrier, and that's cheapness. WSJ is reporting that at his previous job as CEO of Global Crossing, Legere "cut capital spending… to about $250 million in 2002 from about $3.2 billion the year before, reduced the company's workforce by more than half and relocated its headquarters from Beverly Hills, CA to New Jersey – first to upscale Madison, but then to lower-cost Florham Park."

The Journal is also reporting that Legere "still uses an old Global Crossing backpack as his briefcase" and "has swapped out free sodas in T-Mobile's corporate offices for vending machines, halted merit-based pay increases and brought an end to a program that gave longer-term employees free phones." Legere also told WSJ that his essential philosophy is that "it should not only be cheap, but it should look cheap," which could fit in well with T-Mobile's new UNcarrier strategy against Verizon, AT&T and Sprint.

How many of you are liking what John Legere is doing at T-Mobile? Is he steering the magenta carrier into the right direction? Let us know in the comments down below.