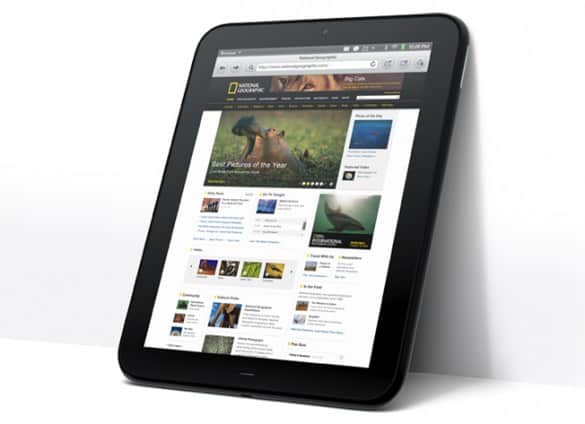 I'm sure you all remember the the WebOS powered HP TouchPad. The tablet was never really given a chance to succeed for some reason and seemed to be discontinued and removed from store shelves almost as fast as it hit them. The result of that decision was the fire sale of all fire sales back in the closing months of 2011 where people were able to pick up a 16GB TouchPad at $99 and the 32GB model at $149, prices unheard of at the time for a quality tablet.

A lot of the people who picked up the tablet at the time did so with the sole intention of installing Android on that bad boy, and thanks to the awesome developers in the community the process was pretty easy. That level of tinkering on high tech gadgets still makes some people uncomfortable and it's important to remember that for every one of us that like to mess around with our devices and customize them to our hearts content, there are ten others out there who don't know much more than hitting the power button and expect things to just work.

Those people are not immune to wanting the latest and greatest software and applications on their tablets however, and while rooting and installing a new OS on it may not be their type of thing there are other solutions. This is where a new kickstarter project by Phoenix International Communications and OpenMobile comes in.

The two companies have collaborated on what they are calling the "Android Compatibility Layer" for TouchPad. Once installed the ACL enables Android applications to be run on the TouchPad. In just about two weeks the interest has been there and the project has blown past it's $35,000 goal and has a total of 600 backers at the time of this writing.

Backers of the the ACL averaged a donation of $62.39 with each dollar amount giving contributors a different incentive or gift in return. For instance a pledge less than $30 gets people a Phoenix-branded LED keychain flashlight. Donations above that get contributors actual access to the software starting with a $30 for a secured copy of the software once it's released, $90 for access one week prior to release, $150 for two weeks early access, and $250 to be a beta tester. Top level backers gave $500 in order to secure a copy of ACL on a CD with a pack of swag, $600 for the swag pack and a new TouchPad with ACL, and one person ponied up $7500 for a flight to New York, dinner with the Phoenix team, a white 64GB TouchPad, swag pack, and the ACL license.

The funding for this project runs through Thursday May 23rd and the plan is for the software to be available in July of this year. The company has also committed to use any of the money pledged over their modest $35,000 goal to upgrade their Android 2.3 base with something more current (4.X).