Android’s “problem” with fragmentation is certainly not new. We have all heard that the Android ecosystem is too fragmented to be stable and healthy. With so many versions of Android out there developers can’t make apps that are compatible across Android releases and the plethora of devices being used at any given time.

Before we go any farther I want to make sure everyone understands that “fragmentation” in general and for the purposes of this article refers to the wide range of versions of Android that are widely used. It does not refer to the vast number of Android devices on the market at any given time. Most Android devices can run practically any app in the Play Store so we won’t be discussing a problem that doesn’t really exist. 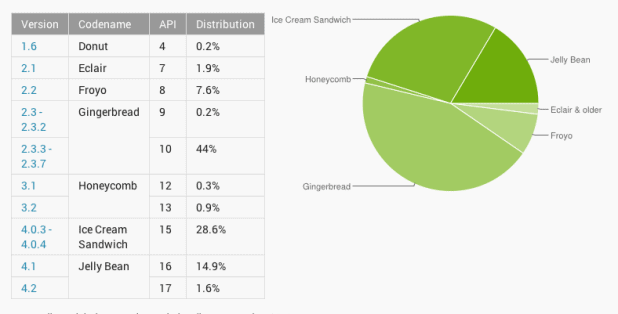 I always find these statistics shocking at first glance. How can almost half of Android users still be using Gingerbread? I was using Gingerbread back in, like, the dark ages. Who are those people? Don’t they know they can probably unlock their bootloader, root their device and upgrade to at least Ice Cream Sandwich in less than a half an hour? I don’t get it.

This is one of those times that people like me need to take a step back and understand that not everyone is as enthusiastic about their mobile device as I am. Some people just use their phone to, well, make phone calls, maybe check Facebook every once in awhile and that is about it. Not everyone is a super user determined to be on the cutting edge of mobile technology. There is nothing wrong with those people, necessarily, they just have different priorities. Mobile devices, like all forms of technology are there to do what people need them to do. If someone’s habits and/or lifestyle don’t demand that they have a super smooth experience, Google Now, and the many other upgrades Android has seen over the last couple of years then they just don’t need it, and spending time or money upgrading their smart phone would be a waste.

It is also important to remember that not every phone out there is capable of running JellyBean. For a device to be certified by Google to run Android 4.1 it needs to have at least 340 MB of memory available to the kernel and userspace, so any phone with 258 MB of memory is out of luck.

We should also keep in mind that many of the gains in terms of global market share that Android has made recently have been in developing countries around the world. These consumers cannot generally afford high-end devices that are capable of running the latest version of Android. The wonderful thing about Android is that it is free, so it allows consumers access to cheap, stable devices that can enable them to interact with each other in ways that they wouldn’t otherwise be able to.

So is Android fragmented? Yeah, kinda. But is that a bad thing? Not really. If you want the most recent and most advanced version of Android you can find a plethora of great devices that will fit your budget and needs. On the other hand if you don’t really care you can get a dependable smart phone that will cost you almost nothing. Choice  is what an open operating system is all about, and Android gives more options to more consumers than any mobile OS in history. That is why we love it.