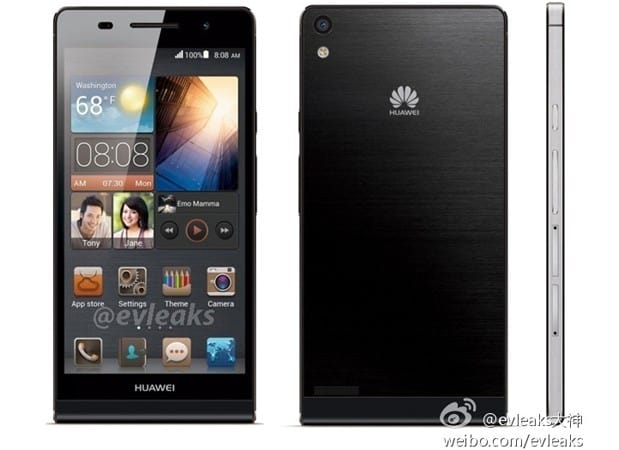 It wasn't all that long ago that Huawei only manufactured low-end, ugly phones. They got almost no recognition outside of China. They weren't even trying to sell most of their products in the US, mostly because nobody here wanted them.

They've certainly stepped their game up lately, way up! It really started with the Ascend Mate, a massive 6.1 inch phablet(maybe more like a phone capable tablet.) While it initially garnered headlines primarily for its gigantic screen, the largest at the time, recently it has garnered tons of positive reviews. Users have raved about its remarkable battery life, surprising lightness and all around usefulness.

One thing that didn't exactly get much appreciation was the Mate's style. While certainly not ugly, it was definitely more utilitarian than most would've liked. It seems like Huawei listened as their newest phone looks to be a major step up in the looks department.

The Huawei  Ascend P6 has been kicking around the rumor mills for  a little while now. First we heard about how remarkably thin it would be. A while later we got the expected blurry shots. Taken, of course, by an apparent first time camera user (or perhaps a company trying to build buzz for a product?) Now it appears the official renders have leaked and it is pretty sexy. Not HTC One sexy, but still worth a second glance.

Huawei has their "Beauty" event on June 18th and it would be logical for them to release this little beaut at the show. If their was any doubt Huawei Chairman Richard Yu actually told his followers that the phone in the leak was indeed a member of the P series. Then he went on to confirm that yes, indeed, the phone would be released on the 18th. The post was immediately deleted, (Totally not a strategic move to buzz the phone or anything) but it was captured by the internets for all to see.

With HTC's apparent internal crash and burn, will Huawei be able to edge into the US market? Its certainly a possiblity, especially if they can get our government to let them sell their phones as they're a Chinese company. I know its a matter of national security and all, but come on Obama, haven't you seen the Oppo Find 5?

How do you guys feel about Huawei? They certainly make some interesting phones, would you ever be interested in one? Let us know in the comments below?