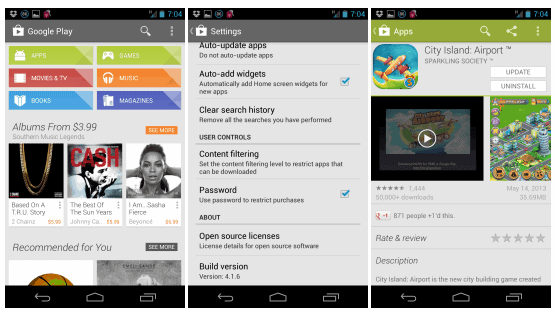 Look what just popped up? A new version of Google Play. And on the eve of Google I/O. It's now at version 4.1.6 coming from 4.0.27. It doesn't appear to have to much of a changelog. But right away we can see that the buttons on the home screen of the Play Store are now colored instead of white. Also the buttons on App screens (open, install, uninstall, etc.) are now white. There are also some minor visual tweaks, which if you aren't OCD about that stuff you probably didn't notice them at all.

Google usually doesn't release a new changelog with each update. But I'm sure Google has some new features in here that we'll be introduced to tomorrow morning during the Google I/O keynote. What is particularly interesting with this version of Google Play is that it's a bit smaller than previous versions. It's 5.75MB, and the last six versions were around 5.89MB in size. So I wonder what they shrunk or got rid of?

Want to download the new version? Well we've got a link down below just for you. Once you've downloaded the APK, you'll want to make sure Unknown Sources is checked on your device (Settings > Security > Unknown Services) then just hit install and a few seconds later it should be updated. Let us know in the comments below if you notice any other changes with this version.