How long have we been hearing about Google+ Hangouts? Or at least the name "Hangouts"? For far too long now, at first we thought of it as "Babel", today Google announced it at I/O '13 and it officially replaces the Google Talk app for Android. In fact, the tagline of "Hangouts (replaces Talk)" is pretty conclusive, wouldn't you think? It seems that the app is available to download and install now, I managed to grab it on my One X but, it wouldn't let me install it on my Nexus 7 which is very strange – that could well be a regional problem as I am in the UK.

Regardless, it looks like Google is aiming for a quick turnaround with this. What was pegged to become the all-encompassing messaging app has basically replaced Google Talk with a heavier focus on conversations that can last for as long as you like. Photos and video chat are just another tap away and there's an overall focus on bringing people together, rather than an improved service. The app looks good and certainly feels like a nice change from the old Google Talk app: 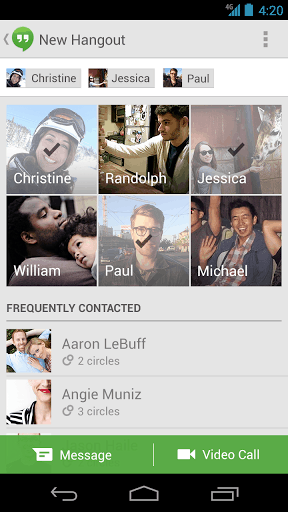 It works well on tablets, too: 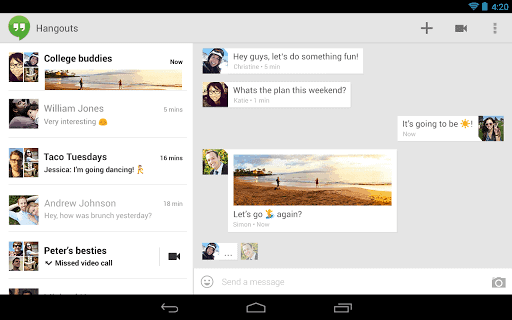 Hangouts is a much larger service than just a new mobile app for Android of course, and you can read more on the whole thing here. I'm looking forward to getting some of my friends to try out this new app as a better way to communicate than SMS or Google Talk and thanks to the app being available on iOS as well, it shouldn't be too difficult for me to find some more guinea pigs.

Some of the key features of Hangouts are synced conversations, the ability to share photos inline, conversations that last for as long as you want them to and curiously enough the service does not allow you to be "invisible" any more. Which is actually a shame because I used that quite often. To get Hangouts on your Android devices now, head on to the link below and watch the video from Google for more info: