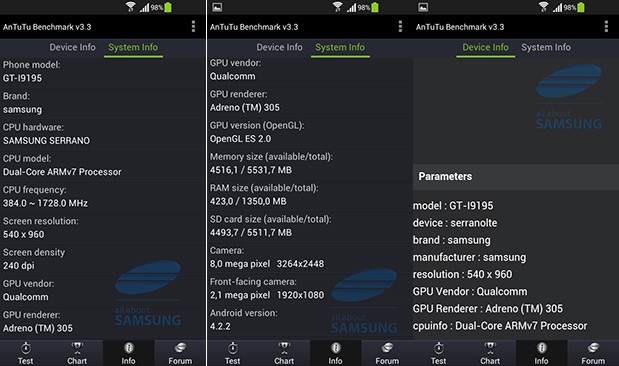 There have many rumors and unofficial "confirmations" for the mini version of Galaxy S4, called unsurprisingly the Galaxy S4 Mini. The phone is supposed to have a 4.3" display, which only 3 years ago was considered huge for a smartphone, so this says a lot about how big the "regular" smartphones have become these days.

This wouldn't be the first time Samsung announced a mini version of its flagship, either. Last year, Samsung released the Galaxy S3 Mini, and just like the S3 Mini, the S4 Mini will look like its big brother, but will have little in common with it in terms of specs. Someone seems to have tested the S4 Mini in the AnTuTu benchmark, which then revealed a dual core 1.7 Ghz Snapdragon 400 processor, with an Adreno 305 GPU.

The Galaxy S4 Mini also comes with 4.3" display with a qHD 960×540 resolution. For a high-end device with a small screen I'd expect at least a 720p display at this point, so I'm not sure if Samsung is trying to position this phone as a high-end one just like its bigger brother, or more of a mid-range one. If it's a mid-range one, then the price will need to be reflected in that, too, and not just the specs.