This time we’re looking at a new dock for the Galaxy S4, this one’s from RokForm. It’s actually named ‘RokDock Galaxy Stand’ but it should work – in theory – for any Android device that uses a microUSB charger and has the port centered on the bottom of the device. I tested it with the LG Lucid 2 and the Nexus 4, in addition to the Galaxy S4, and both worked great. The RokDock is made of aircraft-grade aluminum, which makes it rather heavy for a dock. Note, when you first receive the RokDock you’ll have to take out the screws to feed the included charging cable through. 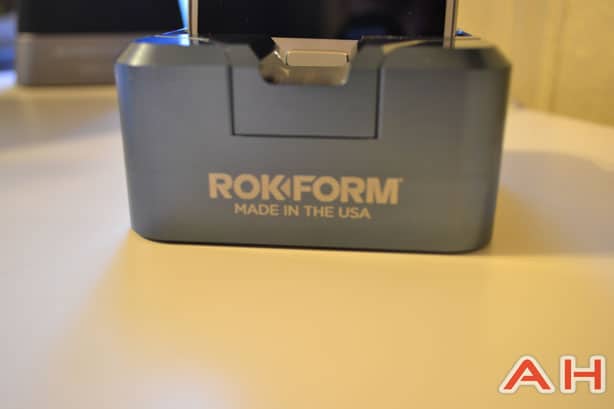 I’ve been using the RokDock for close to a week now and it’s pretty good. Especially given how many different devices I have on my desk right now, it was constantly in use. When one phone dies, throw it in the dock and use another one. It’s fairly heavy, which isn’t always a bad thing. There was no slipping or sliding around. There’s not much else I can say about it. It’s just a dock, nothing to fancy, just made out of really great material. The RokDock comes in a couple of different colors. Mine was all blue, as you can see in the pictures. Which I think it looks great in that color. The only downside to it I think is that it’s portrait only. There are not a whole lot of landscape docks around, and ones that work for multiple devices are basically non-existent. I’d definitely recommend this to those picking up a Galaxy S4, S3, Nexus 4, or any other device that has a microUSB port on the bottom. Unfortunately, it won’t work with the HTC One. You can grab the RokDock from RokForm’s website, it runs at around $100.