Skip to content
Trusted By Millions
Independent, Expert Android News You Can Trust, Since 2010
Publishing More Android Than Anyone Else
39
Today
85
This Week
728
This Month
6671
This Year
124194
All Time

When we get a call through to our smartphones, there are a number of ways we can let people know that we’re not available to take it. The most common options are to head into your SMS app and send that person a message, with a reason why you can’t take the call. Either that, or we just let voicemail do its work. It’s strange that after all these years we’re still doing the same thing, isn’t it about time we tried something new? CallSnap is certainly a fresh idea but, is it one that works?

Description: CallSnap is an Android app that replaces your incoming call screen with its own screen. This screen then gives you the option to select to send a snap to someone. The premise is quite simple; somebody rings you and can’t answer the phone, so you send them a photo of what you’re doing which stops you from answering their call. It’s a great concept and one that I can really imagine having quite a lot of fun with, certainly. There’s little in the way of a complicated set-up or anything like that either, making this an accessible app for all to use and enjoy. Take a look at the trailer below:

How it Works: To get started with CallSnap, you’ve first got to head on over to the Play Store to download the app. After that you’ll see a couple of options. 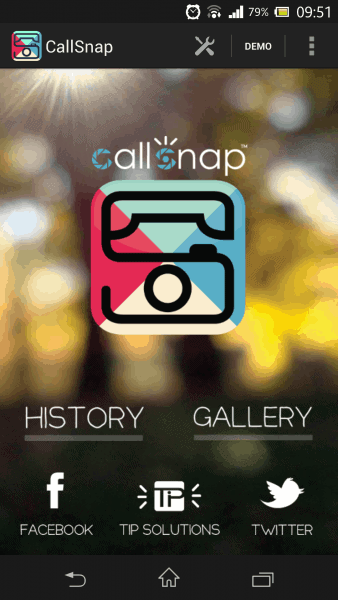 From here, you can take a look at your history or open up the gallery. If this is the first time you’ve used the app, then it’s best to take a look at the demo part of the app. 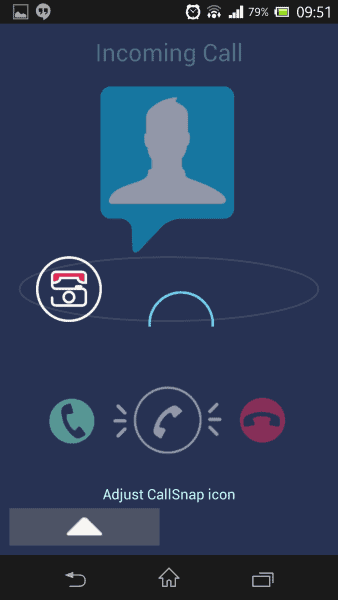 When someone rings, all you have to do is slide the icon to the camera logo, and then take your shot. So, if my girlfriend rings and I’m playing on SimCity or Minecraft (as usual) I can just send her a photo of my grand city. A photo alone is perhaps a little cold and unfriendly, which is why CallSnap adds a little something extra: 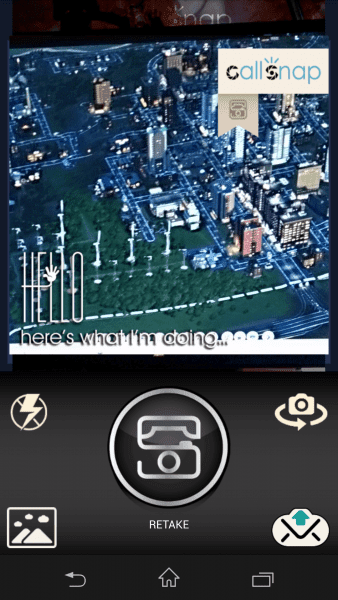 After that, you can send it to the caller via a MMS message. Of course, this is just what I’d do with the app. You could do so much with something like this. For instance, you can get really cheeky and send a photo of your beer at the bar, or a photo of your kids to let people know that you’re a little pre-occupied at the moment.

Opinion: I actually enjoy talking on the phone but, these days I seem to be busier than I used to be, working in different time zone to most of your colleagues will do that. So, I often find myself ignoring calls when I am gaming, or watching a film. I don’t want to be rude though, and I don’t to become a slob, either. So, the idea of being able to take a quick snap of what I’m doing is great. Not only that but, when I am out with my girlfriend I can take a picture of where we are, the cinema, a fair, the pub or whatever and send it off to friends and family. This is a lot of fun, and with 4G becoming the norm in a lot of places now, this sort of thing is finally possible.

Conclusion: CallSnap is a fun new app that can make it a little more fun to say “I’m busy”, not just that but, you can use to entertain others as well. Instead of just brushing someone off, you could send them a funny image of just why you can’t answer the phone. It gives us yet another excuse to take a photo as well, and in this world of quick, throwaway photography, it’s nice to have a little bit of a boost to take a snap every now and then, even more so when it has even the slightest bit of meaning. It’s free, quick and easy to set-up so, what are you waiting for? What’s more is that CallSnap is an app that’s only going to get better with time. There are updates coming that will allow us to send video and the ability to customize the text on the photos.