Earlier this year, Facebook called a press event to announce its new Android launcher, dubbed Facebook Home. The launcher would make Facebook the center of everything you do on your phone, which for certain people, is great. When the app hit the Play Store, reviews started pouring in, and as you can tell by the app's two star rating, they were not good. Users slammed the app because it is difficult to navigate, causes poor battery life, lacks customization options, and much more. Despite these poor reviews however, Facebook announced some pretty decent numbers for Home today.

Earlier on Thursday at Facebook headquarters, the company announced that its home replacement app has been downloaded more than 1 million times since launch. The company says that most of those downloads are coming from early adopter males. The launcher has shown good signs for mobile usage, the company notes. Facebook says that it has seen a 25 percent increase in feedback and the amount of time spent in the Facebook app since Home launched.

"Facebook is already the most-used app on mobile devices, so we're really excited we can bump that up by 25 percent," a public representative for Facebook said at the event Thursday morning.

However, Facebook will not let the early "success" stop it from making the app even better, which as we all know, it needs. The social network announced that starting Thursday, Facebook Home will be receiving monthly updates to add new features and fix bugs. The first update, according to Facebook product director Adam Mosseri, will begin to roll out sometime today. 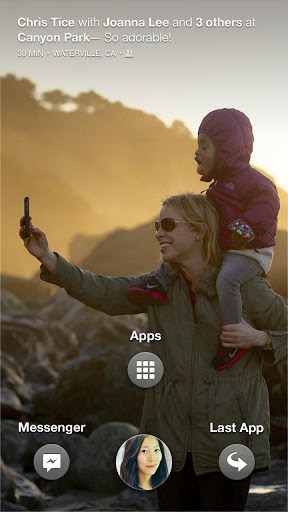 New features coming soon, but not necessarily in the first update, include improvements to Chat Heads that make the service easier and quicker to use. Future updates will also introduce a new full-screen interface for apps that can be accessed with a single swipe. You will also soon be able to create folders in the app launcher. Finally, tutorial pop-ups will start to appear more frequently with the first installation.

"It's important for us to not launch features until they're absolutely ready," said Mosseri. This is part of Facebook's new philosophy to focus on "mobile best," as opposed to "mobile first."

What do you think of Facebook Home? Do you use it? Let us know down in the comments!