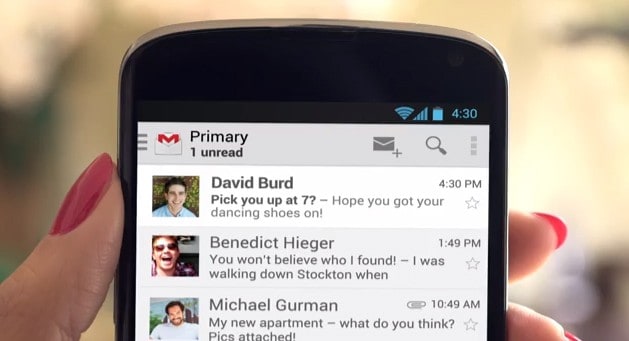 Noticeably absent from Google I/O this year was the release (or even announcement) of a new version of the Android operating system. While at first many people expected Google to unveil Android 5.0 Key Lime Pie at the event, those rumors later turned to Android 4.3 Jelly Bean rumors. But, Google I/O has come and gone and Android 4.2 is still the most recent version of the operating system available. Naturally, however, this has only led more rumors and speculation as to what we may see in the next version of Android and when we may see it. Currently, all signs point to Android 4.3 Jelly Bean being the next update.

Earlier on Wednesday, Google announced a major update to the Gmail app for iOS, Android, and desktop. The company also released a 60-second video showing of the Android app running on a Nexus 4. Naturally, people all over the Internet examined the video for any hint as to what we may see in the next version of Android, what the next version will be, and when we can expect it. And they "found" something.

This Gmail redesign was originally leaked last week, but according to some people, the images actually told an entirely different story. As a reddit user pointed out, every Nexus device starting with the Nexus S and going through the Nexus 10 has had press images that revealed what the operating system the device ran at launch. For example, the Nexus S launched with Android 2.3.0 Gingerbread and the clock on its press images read 2:30. The Nexus 10 launched with Android 4.2.0 Jelly Bean, and its clock showed 4:20 in press images.

The Gmail screenshots leaked last week that turned out to be real, showed a time of 4:30 on the clock. So, naturally, that would lead one to believe that the Nexus 4 would soon be receiving Android 4.3, right? Well, today, when Google officially announced the Gmail update, the company released new screenshots to show of the features, but supposedly, the leaked images were the ones that were supposed to be released, but Google changed them at the last-minute. In the screenshots released officially on Wednesday, the time reads 4:20 again.

The craziness doesn't stop there, though. In the video released by Google to promote the new Gmail app, it's quite apparent that the clock on that Nexus 4 reads 4:30, which would lead some people to believe that Android 4.3 is in fact nearing.

Is this all be a big coincidence? Probably. But, we do know that Android 4.3 is imminent, perhaps launching on June 10th, so it's not too surprising to see Google dropping hints as to what is coming. What do you think? Let us know down in the comments!