We have had quite a few pieces of relevant news for anyone looking to pick up the Galaxy S4 over the last few days. First we found out the AT&T variant would ship with a locked bootloader. Of course less than a week later we found out that a work-around had been found and all was right with the world once again.

Some of you may have heard a rumor back in March that CyanogenMod wouldn’t be supporting the Galaxy S4. It is important to keep in mind that this rumor didn’t come from any official CyanogenMod sources, but it did make the rounds in a few different forums at the time. Today we discovered what is almost certainly proof that CyanogenMod 10.1 will indeed be coming to the Galaxy S4. 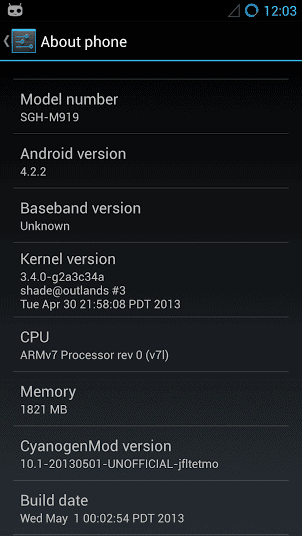 What you see above is a screen shot posted by Steve “Cyanogen” Kondik. It clearly shows an early version of CyanogenMod 10.1 running on his Galaxy S4. Obviously this is the T-Mobile variant, not the AT&T variant we discussed above but still, here it is.

Of course we have no idea when the first nightlies or builds will start being released by the CyanogenMod developer team, but this seems to indicate that we may see some releases starting in the near future. Keep in mind that this is, for the moment, conjecture. Steve said in what appeared to be a joking manner ” Definitely not supporting the S4″ but I guess that this is all just an elaborate ruse designed to screw with tech writers like myself and the general public.

As soon as we know more about CyanogenMod’s official plans for the Galaxy S4 we will pass it along. In the mean time, does the availability of main stream custom ROMs influence your purchasing decision? Let us know in the comments below or on Google+.