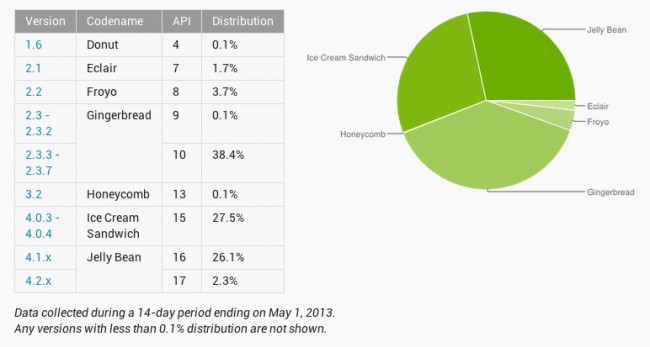 It’s that time of the month again. Time for the Android Developers team to update the OS distribution. Google collected data during a 14-day period ending on May 1, 2013. And Jelly Bean (Android 4.1 and 4.2) have jumped up to 28.3% from 25% in April. We’re beginning to see a decline in ICS, which is probably due to those devices finally getting updates to Android 4.1 or people upgrading. Compared to last month, ICS  went down about 2%.

Now onto the biggest piece of the pie, Gingerbread. Gingerbread has been the leader for quite a while now. In fact since before ICS was announced, which was almost 2 years ago now. Gingerbread only went down about 1%. Going from 39.8% to 38.5% in May. Not much of a change, but that’s still quite a bit of people getting off of a nearly 3-year old OS.

Additionally, last month the Android Developers announced on their Google+ page that the giant leap forward for Jelly Bean is likely do to an update in the way that they collect the data. Instead of pulling in numbers based upon devices that have checked into Google servers, they are using numbers based upon users who visit the Google Play Store.

The new device dashboards are based on the devices of users who visit the Google Play Store (rather than devices that have checked-in to Google servers). As a result, the dashboards more accurately reflect the users most engaged in the Android and Google Play ecosystem–and thus most likely to download and use your apps.

This is good for developers, as over half of the Android population is now running Android 4.0 or higher. Which is a lot better than having the majority running Android 2.3, even though the majority still runs that version individually. Hopefully we’ll see Gingerbread continue to decrease over the next couple months as the HTC One, Galaxy S4 and whatever Google announces at I/O come out to the carriers and into customers hands.

What version of Android are you currently running? Let us know in the comments below.