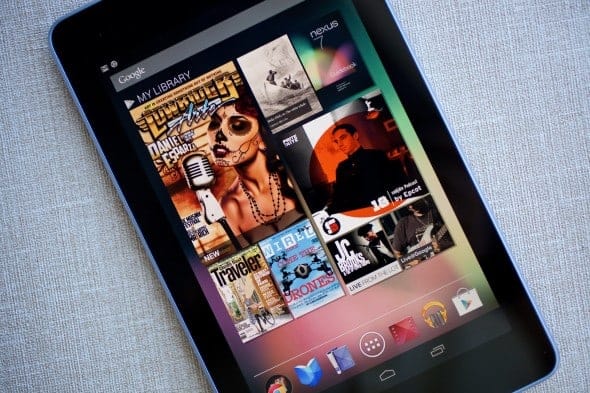 This evening, an analyst is saying that Google will unveil a second generation Nexus 7 at Google I/O next week. Well we kinda figured that. But this analyst seems to know what specs we’ll be seeing in this device. Analyst Ming-Chi Kuo from KGI Securities sent out a research note revealing potential specs of this new device, just days ahead of Google’s imminent announcement.

The tablet is still being made by ASUS. The new Nexus 7 will have:

Now this could all be spot on, but it could also be very far off. But it is one of the first leaks or rumors we’ve seen about the Nexus 7 in weeks. Which kinda had us nervous as we are just days out from Google I/O. If these specs are true, this means that we’ll see plenty of upgrades. It’ll be a better display, but keeping the same size, a newer CPU – although I think the S4 Pro is a bit dated now, an additional camera, and a bigger battery with wireless charging support.

As far as the design goes, the Nexus 7 is expected to have smaller bezels and feature a plastic case. Hopefully polycarbonate. Kuo also provided details on the actual suppliers of the various components in the device. Which you can see in the screenshot down below. But beware, none of this is confirmed at this time. 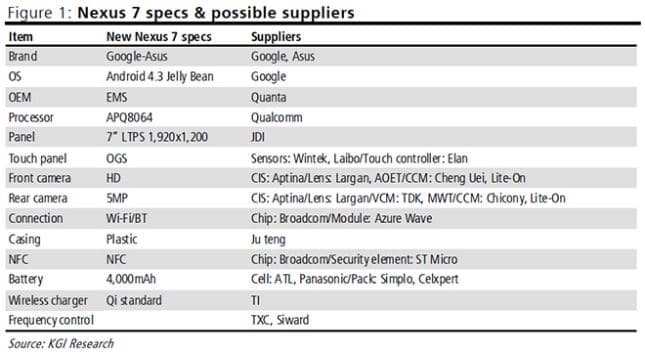 The analyst also says that Google would be selling this device at cost, losing from $5-10 per device and it would be available through Google Play and other retailers worldwide, similar to how the original Nexus 7 and Nexus 10 were. Storage isn’t mentioned, but we’d expect a 16GB and 32GB versions and possibly a 32GB HSPA+ version of the Nexus 7.

Additionally, Kuo says that the new Nexus 7 will be named “new Nexus 7” and not Nexus 7 2 or something weird and confusing like that. Even though “new Nexus 7” is still going to be confusing. So there you have it. We’ll know more next week when Google officially unveils the device. But until then, this is all we’ve got.