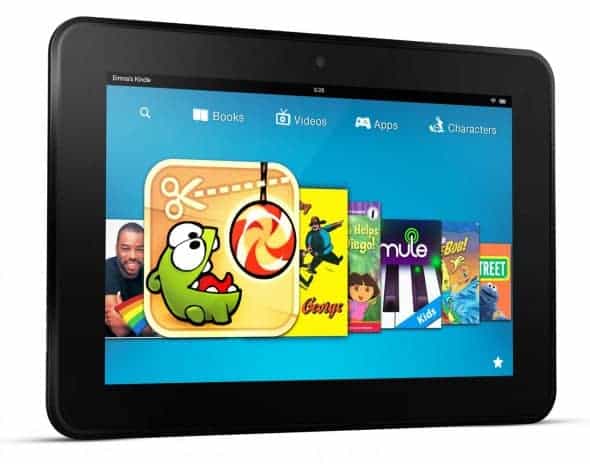 Rumor has it that when Amazon refreshes their Kindle Fire line of tablets later on in the year there will be an addition to the family. It seems as though Richard Shim, who happens to be an analyst for NPD DisplaySearch, gave the the heads up to CNET that Amazon is planning on coming out with a 10.1 inch tablet to go along with their already successful 7 inch and 8.9 inch Kindle Fire tablets.

There was a suspicion last year that we would see a 10.1 incher from the online superstore, but instead we got introduced to a  8.9 inch version to go along with an updated 7 inch Fire. According to Mr. Shim when this year's models are announced it will be the displays that will be the story, almost as much as the new model.

If his prediction holds true, all three of the 2013 Kindle fire models will feature displays that have densities of 300 pixels per inch (PPI) or more. For those of you who like to argue with or generally annoy Apple fans, that is better than the 264PPI  with which the vaunted iPad with Retina Display currently offers, but I'm sure you all probably knew that. In fact it seems that the new 10.1 inch offering will be the same WQXGA (2560—1600) that is featured on the Nexus 10.

Mr. Shim believes that mass production for the new tablet will begin some time during the third quarter of this year putting it's availability right in time for the holiday rush of Q4. Unfortunately there was no mention of the oft rumored Kindle smartphone, a handset that has been speculated about for almost as long as the recently released Facebook phone.

The Kindle Fire is a trick or treat line of products depending on who you ask. Even as the company is expanding the availability of their app store into more countries, it is still plagued by an extremely limited catalogue of application choices. I'm the type who appreciates them for what they are however. First of all it can be argued that without the success of the original Kindle Fire, we may not have gotten a Nexus 7. Secondly, these things are the ultimate media consumption device so while yeah the app store is lacking, you are still getting all of those Kindle books, a pretty decent TV and movie selection, and of course those shopping deals that Amazon is known for.

Needless to say I have no doubt that the 10.1 inch Kindle Fire will be every bit as successful as the previosuly released smaller iterations.