Skip to content
Trusted By Millions
Independent, Expert Android News You Can Trust, Since 2010
Publishing More Android Than Anyone Else
4
Today
54
This Week
742
This Month
6466
This Year
116438
All Time Android is generally not associated with Malware, however recently Android has started to receive spikes in its Malware. It has been reported that the second half of 2012 saw a 292% increase in Malware in relation to the first half of the same year. This is due to many factors one of which being that Android is spreading so rapidly, and is fairly scattered due to having many manufacturers and devices based on Android.

Another issue some users will face is that it is actually becoming harder to notice, detect and remove the Malware from your devices. This is because some users just don’t consider the security of their data and personal files etc, whilst others just don’t even think that Virus’ and such don’t exist on Android, let me tell you they do! Don’t start to panic however, they aren’t usually as bad as you think, but you should do your best to keep your eye out for them, and not get yourself infected in the first place.

If you think you’ve already been infected with Malware, there are some tell-tale signs to look for, to establish whether or not you are actually infected in the first place. These are:

If you’ve noticed a decrease in  your battery life, whether it be a big decrease or not, its worth checking where this power is going and why its being used. A number of reasons Malware can be linked to bad battery life is what those apps are actually doing, they can range from pushing ad’s to your device or sending data or other services to apps and servers without your knowledge.

Malware will often hide within a normal looking app, so a good way to try and pin-point which app is causing your battery drain is to try and install apps one by one, checking how that app affects your device. An easier and much more efficient way of doing this is by using a battery monitoring app. I have two of these on my device, and they are brilliant.

One is BetterBatteryStats (BBS) which is hands down one of the best apps I currently have on my device, it logs absolutely every drain of power from your device, and tells you where its going. It tells you stats such as % drop per hour, so you know what’s normal for your device, but also Kernel and Partial Wakelocks. A wake-lock is where your device is asleep, but something is waking it without your knowledge. 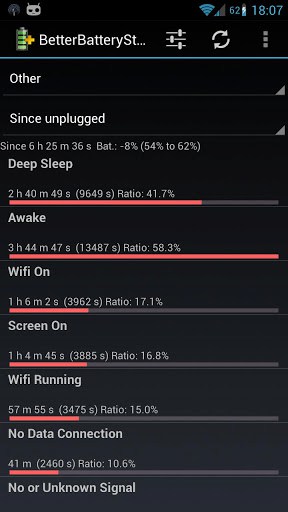 The other one I use is a relatively new app names Wake Lock Detector (WLD), which is similar to BBS but focusing just on your wakelocks and helping you to reduce them. Both of these apps come from XDA developers and are very powerful apps.

Another way you can tell whether or not you have Malware is how your device is handling its calls. People generally relate dropped calls and such to their carriers, however it can sometimes be caused by Malware. If you have checked your carrier and they aren’t having issues, its probably time to start looking for Malware. Carriers can also often tell you the root cause of your dropped calls, which can help you finding the source.

Another way you can tell if you’re infected with Malware is whether you have seen a big increase in your phone bill. Malware can often start and spread using SMS messages. If you get infected, it can send itself to every contact on your phone, which can then send to every contact from all of those contacts and so on. This can repeat over and over again and can therefore cause increases in your bills.

These sorts of Malware are fairly easy to catch, as most companies allow you to check all of your calls, texts and other uses from their websites. If you see a spike in your bill, pin-point why and erase the problem.

This is largely related to your Large Phone bills, but is a little different however. If you have a big spike in your bill price, but cannot see any calls or texts that relate to your bill, then its probably due to your data. Malware can cause spikes in this as they can utilize push services etc. So they can send info out using your data connection, and can also spam your device with ads and other services all using your personal data allowance.

There are methods of combating this also, there is an App called My Data Manager which is a one-stop-shop for your data needs. Not only can it track every piece of data your device uses but allows you to set a limit so when your data reaches that limit, your device stops any other data communications. Therefore saving you money on your bill as you’ll never go over your quota. 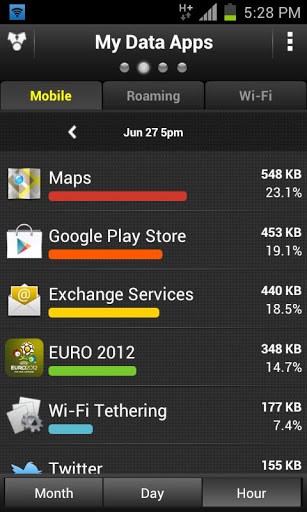 This is probably the most common issue when facing Malware.  As Malware often sits on your device running tasks your performance can decrease significantly. This isn’t because the Malware is ruining your device, its simply because your resources are being used on the Malware, and not on tasks your trying to perform. It is also often linked to the Malware using your data services, so very often these issues come hand-in-hand.

GingerBread seems to be the highest targeted version of Android, then followed by ICS(Icecream Sandwich) and then finally JellyBean. This is most probably due to the security becoming tighter and tighter as versions go on. The Android Developer dashboard states users with these firmware versions are 88% likely to encounter some type of Malware.

The First thing you need to do if you think you have Malware is located the infected app. You need to isolate and remove the rogue app as soon as possible. This can be done using methods stated above (Battery Monitoring, Data Monitoring etc). If this doesn’t work, try and download an App such as Clean Master. This can help remove “Residual Files and Folders” which are items left behind by apps already removed. If all of this fails, your only option is to “Factory Reset” your device. You can backup your apps and data first using an app such as Carbon or TiBackup. 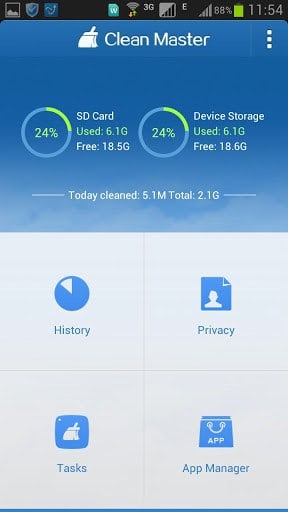 Also there has been a big influx of security apps from some big names such as AVG and Avast. I’m personally using Avast, and its brilliant. I’ve seen no battery drop since installing and allows me to not only protect and scan my device for Malware, but can also track my device if stolen, remotely wipe and and even hide itself from my App Drawer.