From the patent information it seems like Google’s idea will revolutionize the way we interact with our devices, and probably the content on them, as well. Instead of vibrating the entire device when the display is touched, Google wants to use technology that will vibrate the screen in relation to the interaction. In other words, where you touch the screen is where the device will vibrate.

Apparently, Google uses advertisements as a practical example of such technology. The idea is to use the unique haptic feedback to create layers, which essentially translates to height. In this way, they can layer advertisements on top of one another subsequently allowing them to sell more ad space.

That being said, there are a whole slew of practical uses for such technology. Ultimately, it would increase screen real estate because you could layer content, as well. Touching a bit on the gaming side of things, imagine what kind of interactions the players would have with activities with such technology. 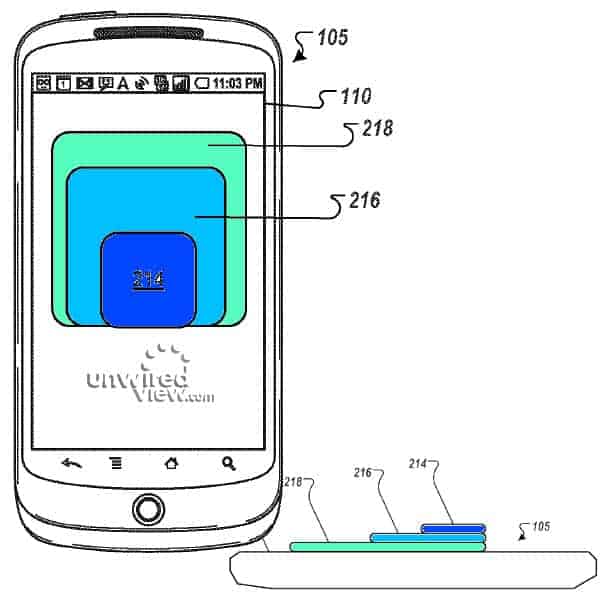 The patent also talks about using the unique haptic technology to make interaction feel much more realistic. For example, if you were to drag ads or a window around the screen, it would vibrate accordingly making it seem like you’re actually moving an object. Not that your device doesn’t do that already, but to expand Google hopes to simulate different textures through the use of the tech. Imagine a window that feels rough to the touch, even on a totally flat touchscreen display.

Of course, I could drone on for hours about all the possibilities, and I’m sure you could chime right in. At this time, it’s just a patent filing. We’ll have to wait and see what Google does with the technology for future Android devices and software updates.