One of the most futuristic features to come to our smart phones in the last couple of years has gotten a major boost today. HTC, Huawei, LG, Samsung and AT&T have all joined the Power Matters Alliance, and AT&T has promised to bring wireless charging to a few of its devices by 2014. The Power Matters Alliance is a community of various companies across several industries related to the mobile industry. The PMA’s stated goal is “to reinvent and redefine the everyday user experience with power by migrating to a safe, smart, and environmentally sound model of wireless charging.”

Essentially the PMA is acting as the standard bearer for wireless charging in mobile devices. Of course there are a few smart phones out with wireless charging capability, most notably the Nexus 4. Unfortunately the proliferation of this technology has been slow for various reasons. Recently chipset makers Broadcom and Texas Instruments joined the organization as well.  This makes it more likely that we will see an add-on for devices that would bring wireless charging. One such possibility is the Wireless Charging Card in the image below. 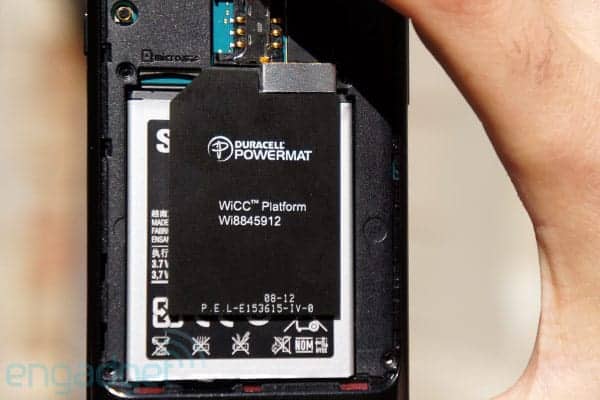 Keep in mind that just because an organization joins the PMA, it doesn’t necessarily have to commit to including this technology in any devices that it makes. Although logically it seems safe to assume that if a company is going to take the time and effort to join, they are at least planning to make at least a few devices or products that will charge using this type of innovation.

The next thing that needs to happen for wireless charging to really take off is for more businesses and furniture makers to start spreading wireless charging stations around the world. We have already seen some minor moves towards this, but if every Starbucks, McDonald’s  and airport were to have large wireless charging mats for people to use, we might see more consumer demand for devices with this capability.

If you were wondering if Apple has joined the PMA, the answer is a resounding no. With Apple’s track record it is safe to assume that if a wireless charging feature does come to the iPhone at any point, it will be through a proprietary charging system that Apple will sell at some ridiculous margin. Although if you are an Apple customer I guess paying three to four times what something is worth is a conflict you have made peace with by now.