Curved screens are certainly not new. The Nexus S had curved glass, although not an actual curved screen, but it did make the screen feel a little more natural to swipe across. Next came the Galaxy Nexus, which has curved glass along it’s screen. This gives the device a great feel under your finger, but it still doesn’t technically have a curved screen.

Then the Nexus 4 came along with a screen that is curved along it’s horizontal axis. When people talk about the Nexus 4 having a great “hand feel” or when they talk about how natural it feels to turn the pages on an ebook, that is what they are referring to. If you think about it, you don’t usually hold your phone directly in front of your face. You are generally looking down at your phone from an angle. Giving a screen a slight curve or tilt makes you feel like you are getting a more direct view of the screen with out tilting your phone to an unnatural position.

There are rumors that the next iPhone will have a wrap around screen. This seems unlikely, since it took Apple five years to give people the tiny misshapen screen on the iPhone 5. But there is no doubt that a curved screen on the next iPhone is a distinct possibility. I would bet any amount of money that Apple will claim not only to have released the first smart phone with a curved screen, but to have invented the curve. But that is another discussion for another time. 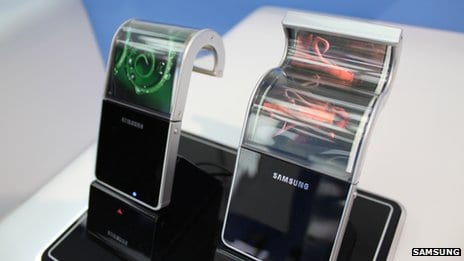 The good news is that various designs for a wrap around screen have been patented by several companies over the last few years. Samsung and Sony have both put significant amounts of research into flexible displays, and we have actually seen prototypes at some of the expos held already this year. No doubt the first OEM to come out with a flexible or wrap-around display will be able to give their devices a futuristic, and very attractive look. But there is also a good chance that flexible or wrap around displays will be able to fit more components into a smaller space while providing the users with an exceptional viewing experience.

Who will be first? Samsung, LG, Sony and even Motorola are all in the running, and this technology is probably coming sooner than you think.