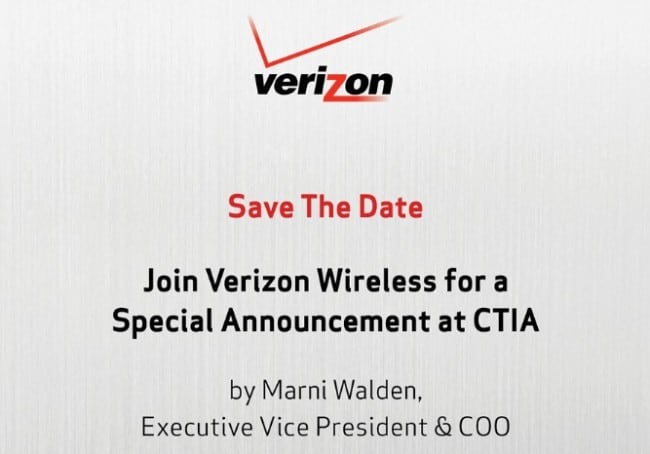 Well look what just popped up in our inbox? It's an invite from Verizon Wireless for an announcement at CTIA. Usually shows like CTIA has been pretty boring, especially for Android news and announcements. But it looks like Big Red has something big to reveal. It appears that their press conference will be done by Marni Walden who is the Executive Vice President and COO of Verizon Wireless.

Verizon has been relatively quiet since the Droid DNA and Galaxy Note 2 were launched late last year. Verizon has only launched a couple of mid-range LG phones since. The HTC One, isn't officially coming to Verizon, but we've heard rumblings that it might be. Perhaps this is when Verizon announces their HTC One? If they do it'll probably be the "HTC Droid One HD 4G LTE" with a huge logo on the back. But that's just my opinion.

So what do you think Verizon is going to be announcing on May 22nd at CTIA? The event starts at 11am PDT, that's 2pm for those of us on the east coast. We'll definitely have to keep an eye on this and see what Verizon has up their sleeves. Maybe they'll announce some revolutionary new plans for your smartphone that will bring in more profits for the country's number one wireless carrier? Let us know what you think in the comments below.