OK, it might not surprise you, but it certainly surprised me. As someone who is heavily invested in the Android ecosystem, you would think it would be easy for me to rattle off the top 10 most popular Android tablets on the market but you would be wrong. It is easy for me to list of the ones I like the most, or even the ones that have gotten the best reviews, but today Read-Write released two studies today that held a few interesting revelations.

Before we dive into the results we need to understand what these numbers mean. The first study was done by Animoca, an Android game developer. Animoca tracked which devices logged into the Play Store and downloaded one of their games between Feb 18 and March 20, 2013. This resulted in a fairly impressive sample size of 978,000 users. The second study was conducted by Localytics, a company that actually specializes in analytics, as it’s name implies. Localytics tracks devices based on any app that uses it’s analytics software, which makes it a much much larger and much more representative data set of around 750 million devices leaving us with a negligible margin of error. This study also doesn’t depend on the Play Store or on a small number of apps being downloaded. 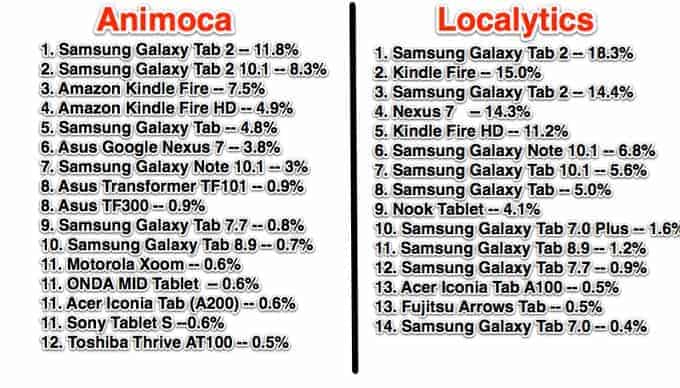 Unsurprisingly the Galaxy Tab 2 is a very successful  device that probably controls around 18% of the Android tablet market. Of course Amazon’s Kindle Fire line has done quite well, and will probably continue to as it represents a cheap device that does everything most tablet users want it to do. For me the surprises come a little farther down the list. First of all the study with the superior data set, Localytics, doesn’t even register the Asus Transformer series at all. That really is a shame because Asus really created something special in that line. Not only that but I wouldn’t have guessed that the Nook would have a larger market share than the Acer Iconia Tab A100.

For the moment Samsung clearly controls the Android market for both smart phones and tablets. But for those of you who fear  a Samsung dominated Android ecosystem remember two things. First of all Samsung offers an incredibly wide range of products that can meet practically every consumer’s needs, and most of these products are very high quality, hence the fistfuls of money that Samsung has been bringing in over the last couple of years. But we also need to remember that the smart phone market is still relatively young, and there are a lot of opportunities for second-tier companies like HTC or Motorola to stage a comeback by producing innovative devices and making sure people know about them. The HTC one is a fantastic device and Motorola is owned by Google and clearly has some big things in the works for what is left of 2013. It seems a shake-up in the Android world is not far away. Stay tuned.