The best those chips can show next year, at least in terms of graphics features, is whatever features are available in OpenGL ES 3.0, which is around the DirectX10 level, but without geometry shaders. Meanwhile, Tegra’s “Kepler Mobile” will be able to take advantage of the latest OpenGL 4.3/DirectX11 features.

If the performance (and power consumption) of the chip permits it, we should see some very impressive graphics in our mobile devices starting with Tegra 5, and beyond. That’s when we’ll really start to put to good use the much heavier Basemark X benchmark, as well as future versions of other benchmarks such as GLBenchmark and 3dmark.

Nvidia demoed the Battlefield 3 game on Kepler Mobile, and while it doesn’t look as visually impressive as being on our PC GPU’s at maximum settings, it does look far more impressive than anything else out there on mobile right now. As Nvidia’s CEO puts it, those “mobile” graphics look “vintage” compared to what Kepler Mobile can do. 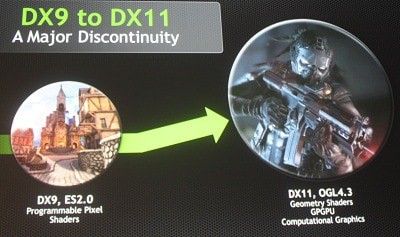 The Kepler Mobile games will look a lot more like games we’re playing on say a lower end PC or notebook GPU, or on an integrated Intel HD GPU. In fact, I’m pretty sure Tegra 5 beats anything Intel has in terms of GPU’s, perhaps with the exception of the high-end version of the upcoming Haswell GPU. But right now there is no way to know for sure, just by looking at images, so we’ll see how it actually performs next year.

One possible issue, which hopefully won’t exist, is the possible low energy efficiency of Kepler Mobile and Tegra 5. We don’t actually know anything about that yet, but I haven’t liked Tegra’s trend lately of becoming less and less efficient with each generation, in an effort to show more performance.

For Nvidia’s sake, Tegra 5 needs to be more efficient than Tegra 3 and Tegra 4, not less, regardless of how impressive it is performance wise. We really don’t want to be using 5W+ chips in mobile devices. In fact, we should establish a new rule. If the chip is not efficient enough to be used in a sub-5″ smartphone (which seems to be the case with Tegra 4), then it shouldn’t be called a “mobile” chip.

I think that would be fair to the competition, who does have more efficient chips, but because of that “drawback”, they won’t be able to make them as fast as Nvidia’s chips, and to the users, who won’t be misled about its power consumption. As a side note, I think that regardless of its power consumption, Tegra 5 could be an amazing match for a future OUYA 2 console.