It seems everyday we’re getting new news about Google’s Babel – unified chat service. We recently heard not to long ago that Gogole was “dogfooding” Babel to Google Employees, also known as testing it before they release it to the rest of us. But there is a Gmail page that mentions “dogfooding Babel in Gmail” which can be found here. 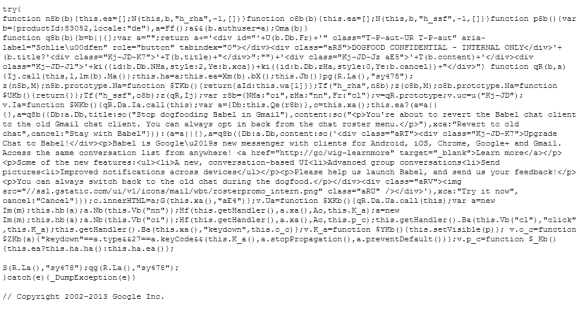 It also lists some of Babel’s features:

There’s also a screenshot provided. It looks very similar to what we already see in Gmail. Except a different font and a tiny bit cleaner. That’s about all we’ve got for information right now. But  we thought we would pass it along to all of you.

Who’s excited for Google I/O or whenever they release Babel? I’m definitely excited for the launch of this “semi unified chat service” as Dieter Bohn from The Verge called it yesterday on the  Mobile Show podcast. It’s supposed to combine Google Talk, Google+ messenger, and Hangouts all into one service that’ll be available on Chrome, Android and iOS. As far as the features go, we’ve heard those features already from an earlier report coming out of Droid-Life.

As more and more leaks and reports come out about Google’s Babel, I’m getting more and more excited. I’m pretty sure I’m not the only one either. I strongly dislike having everything using a different chat client. It gets pretty confusing sometimes. So what does everyone think about Babel? Will we see it released before Google I/O next month? Let us know in the comments down below.