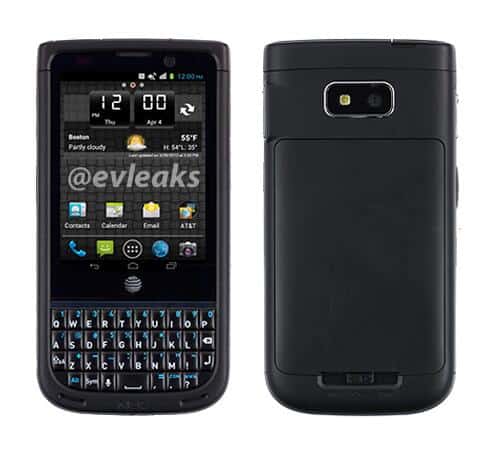 While some would argue that QWERTY equipped phones haven't really become popular, I will point out that they definitely have a market. Niche or not, there are plenty of consumers out there that prefer a physical QWERTY over a virtual keypad.

AT&T will soon be bringing a QWERTY equipped Android device to market, called the NEC Terrain. As you can see from the image it's a much more compact device, and it looks remarkably similar to older Blackberry models. Unfortunately, no further information about specs or hardware has been released, so we don't actually know how big that display is.

You can clearly see a front facing camera, along with a rear-facing camera and paired flash module. Although I don't know what caliber sensor the camera will include, at least we know they're going to be available.

Also, this is clearly just speculation, but the body of the device appears to be developed with some kind of rugged material. It could just be that's the visual design of the phone, but I'm guessing it may actually be dust or waterproof. Again, there's no guarantee because no further information has been released about the NEC Terrain. Then again, the name alone suggests a rugged makeup.

As for the image itself, it was leaked by none other than @EvLeaks. By now you've probably heard that EV is responsible for the image of the leaked LG Optimus G Pro, and more. A lot of leaks are coming from EV these days, actually.

Moving on, there is one question in particular that comes to mind when considering the name NEC Terrain: who is NEC?

NEC is actually a Japanese electronics manufacturer, and this is one of their first forays outside their home market. Interestingly enough, NEC has a pretty wide selection of devices in their lineup, some of which have unique features like the NEC Medias W phone that has dual screens.

What do you think of this thing? I'm fairly certain it's going to be a mid to entry level handset, so the specs probably won't be anything spectacular. Does anyone out there want to try guessing the price of this handset?