In case you hadn’t noticed, Samsung has now officially released all the smart phones. Smart phones in every budget, in every size and with every feature you could possibly want. It is actually pretty overwhelming if your job requires you to be able to speak intelligently about some or all of them. But now we have images that have leaked of what is being called the Samsung NX2000. Reports from Photorumors claim to have confirmed that this is a mirror-less camera running Jellybean 4.1. 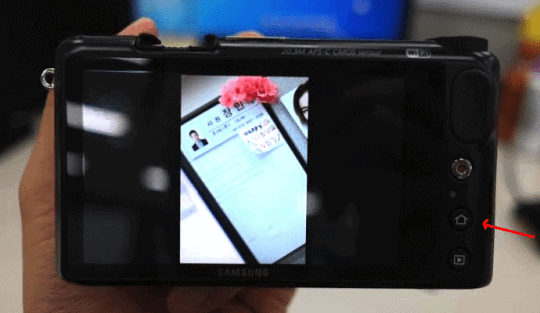 Obviously this isn’t going to be a clone of the Galaxy Camera. You can easily see that this is a more traditional setup compared to the all touchscreen interface of it’s predecessor. It is also clear that there is a Touchwiz-style home button on the right, which would at least support the idea that this device is indeed running Android.

There are other rumors that at least some of these new cameras will ship running Tizen, but at this point all of this information is pure rumor. Most reviewers really liked the Galaxy Camera, but it’s high price point seems to have cooled most consumers enthusiasm for the product. It makes sense to create a camera that can instantly upload pictures to Google+ and that has convenient options to share to Facebook and other social networks. It also seems that the Galaxy Camera took some fantastic pictures for what it was.

But I think the real challenge for this type of device is that it is caught in the middle. The Galaxy Camera wasn’t a DSLR that a professional photographer could use to replace whatever he is using now, even if the convenience of having Android on his camera sounded appealing. But at 800 bucks the price point is too high for most casual photographers as well. Although lots of people complain about the camera on their smart phone not doing well in low-light situations or with motion shots, the reality is that for most of us, the camera on our phone meets our needs.

As cameras on devices like the HTC One continue to improve the quality of a camera what most of us have in our pockets, it seems like the Galaxy Camera and it’s cousins will likely remain a footnote in the progress of consumer electronics, but since all we have about these new devices are just rumors only time will tell. We will keep you up to date as more concrete information becomes available.