HTC seemed to have left out the UK in the last update, which may have made some of you feel less important than their over-seas consumers. HTC rolled out to only certain areas, which hit some European countries. HTC has now made the 1.29.401.12 update live for Unlocked HTC One users in the UK. This comes in a little less than a week after the majority of handsets received the upgrade.

HTC claim the update includes not only various bug fixes, a vast array of security and stability fixes, improvements to HTC Zoe (Camera) and tweaks to Beats Audio. Once properly looked at however nothing clearly obvious becomes apparent between the 1.28 and 1.29 firmware versions, such as UI changes. HTC's official statement claims that although the update seems dormant, it does include a lot of improvements and stability fixes.

The size of the update, does seem to backup HTC's claim that the update includes many bug fixes and improvements, as the update comes in at a whopping 229 MB, which is a fair size for an update. The new firmware is again based on Android 4.1.2 so it may still be a lengthy period of time before 4.2 hits the One.

Thanks to XDA Member Hamdir we have a screenshot of the changelog for the new firmware and the changelog doesn't appear to represent the Size of the update, which further endorses HTC's claims: 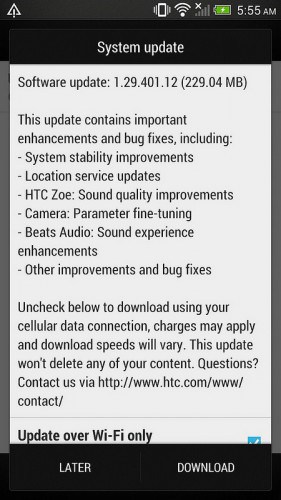 If you're looking to update your HTC One, follow these simple steps:

The update should now pop up, download, install it and you're away.

As usual, Carrier branded HTC One's will still have to wait for their carrier to approve the update for their devices and more than likely add their usual bloat-ware to the updated firmware. Although HTC claim there is a number of updates, their doesn't seem anything visually apparent, or any major and noticeable performance increases. So don't expect anything out of the ordinary after you have upgraded.

If you have received the update, please let us know any changes or improvements you notice!