According to a recent development, it looks like Google has gesture support planned for Glass. More specifically, they’re planning to implement various gestures to make it easier to control the interface. For example, users might be able to use two fingers to zoom in and out of the browser, or wink to take a photo. Some of the gestures are similar to what we already use on smartphones and tablets, yet others are totally unique to the Glass platform.

This information was brought to light by Reddit user Fodawim, who discovered mention of the gestures “buried deep” in the MyGlass code. If you didn’t already know, MyGlass is a Glass companion app that was launched for Android devices just last week.

As they say in the geek world these days, “pics or it didn’t happen.” Fodawim snapped a screenshot of the related code to show off the hidden commands. 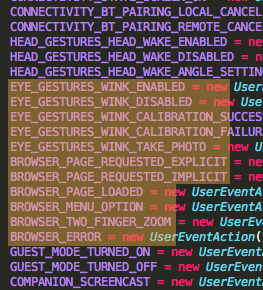 Particularly interesting in that photo are the following commands:

The head and eye gestures are categories, which indicates that more gestures may be on the way, or are planned for the future. The other commands are pretty straightforward except for the last two mentioned. The guest mode and companion screencast commands suggest that some kind of screen share feature may be on the way, as well.

The various head and eye gestures will probably be disabled by default, and for good reason too. No one wants to snap photos by accident every time they blink. Some of the alternate code seems to point to the fact that these settings will be configurable or allow for calibration. That’s to be expected though especially with a device such as this.

It’s a wonder Google cannot keep anything a secret about Project Glass but given how incredibly popular it is in the tech world, it’s no surprise everyone is clamoring for more information about it.

What do you think of all these unique features? Do they sound like cool commands that will help improve the Glass experience or do you think they’ll get in the way instead?

Via: The Next Web